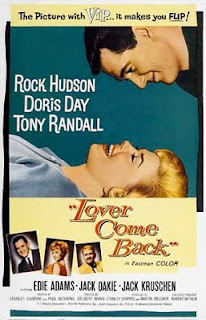 Lover Come Back was the second of the Rock Hudson-Doris Day romantic comedies. It follows the same formula that brought them so much success in Pillow Talk. In fact it follows the formula so closely that it’s more or less a repeat of the first film.

The surprising thing is that it doesn’t really matter. The formula works almost as well he second time around.

Once again Doris and Rock are people who have taken an intense dislike to each other without having ever actually met. And once again we have Rock’s character romancing Doris’s without Doris knowing who he is. And once again Rock’s romantic pursuit starts out as a cruel joke but ends up as true love.

Rock is Carol Templeton, a hard-working and brilliant Madison Avenue advertising executive. She’s got to the top through determination and integrity. Rock is Jerry Webster, an equally successful adman from a rival firm. He’s got to 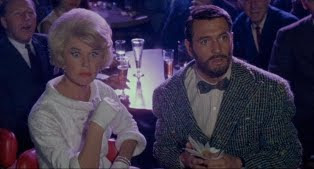 the top by using every sneaky underhanded method in the book. When he steals a rich account from Carol she decides to get revenge, and when she tries to do this he then tries to turn the tables on her. He ends up being mistaken by her for an eccentric but brilliant scientist developing a new miracle product that will prove to be a very rich advertising account indeed. You can pretty much figure out the rest of the plot from there.

Tony Randall is in this one as well, playing Jerry’s boss Pete Ramsey. Pete lives under the shadow of his father who built the business in the first place, suffers from indecisiveness and a lack of self-confidence and has been in analysis for pretty much his whole life 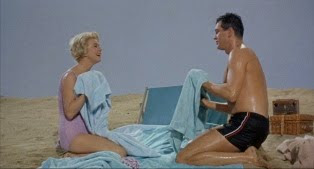 . He doesn’t really serve much purpose in plot terms but he’s extremely funny so no-one is likely to complain.

The two main stars develop the same chemistry they displayed in Pillow Talk, and they’re both skillful comic actors who make the most of a clever and witty script.

Again, as with Pillow Talk, I found myself surprised at just how risque this movie was for its era. We have Doris taking Rock to a strip club, we have drug references, we have girls who are fairly obviously hookers being used as bribes to win advertising accounts. And we have Doris obviously quite willing to indulge in some unmarried sex with Rock. 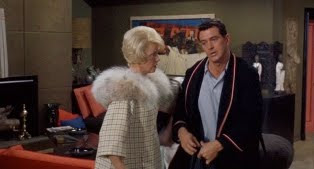 So much for the image of Doris Day as the perpetual virgin.

There’s romance, there’s sparkling dialogue, there are some great visual gags, and there’s non-stop entertainment.
Posted by dfordoom at 10:52 PM