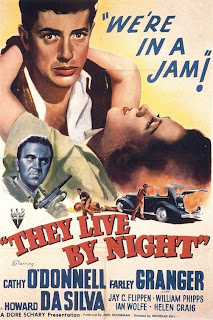 They Live by Night was the first film made by Nicholas Ray. It was made in 1947 but was apparently held back by RKO for a couple of years. This story of doomed young lovers on the run is both a film noir and a romantic melodrama.

Bowie is a naïve young man serving a life sentence for murder. He breaks out of prison with two older men, hardened bank robbers. He meets an odd and equally naïve young woman and falls in love, but although the criminal life is something he didn’t choose he can find no way of escape from it. It is clearly going to lead him to destruction, but he knows no other life.

I can see why some film noir fans might have reservations about this one – it has a level of sentimentality that you don’t normally find in noir. It’s probably the least hard-boiled film noir you’ll ever see. I think you’re more l

ikely to enjoy this film if you accept that what Nicholas Ray was really trying to do was to make a love story rather than a crime story. At times it is perhaps just a little but too sentimental, but it does have some very considerable strengths.

Stylistically it’s inventive and energetic, and it has a freshness and a vibrancy, and a feeling of immediacy and spontaneity that made it a favourite of the French film-makers of the New Wave a decade or so later. Ray makes very effective use of aerial shots

which really gives the movie a feel of the open road. Ray also manages rather neatly to thoroughly subvert the Production Code – how on earth he managed to get way with a movie that is so sympathetic to criminals is truly a source of wonder. At one point he even has a cop admitting that it was society and the law that were at fault! How did he get that past the Code watch-dogs?

I'm not generally a fan of Nicholas Ray's films, and I've been particularly disappo

Farley Granger and Cathy O’Donnell are likeable and sympathetic as the doomed young lovers. As a film noir They Live by Night is interesting; as a love story it’s terrific.
Posted by dfordoom at 3:19 PM