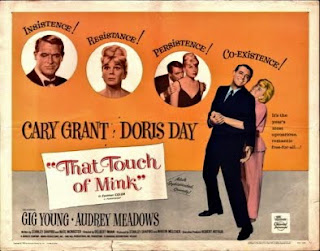 That Touch of Mink was one of Cary Grant’s last films and it’s not one of his most highly regarded. In fact it’s rather fun although it has its problems.

Grant is teamed this time with Doris Day. She apparently felt during the making of the movie that Grant was rather distant and there’s no doubt that they don’t quite generate the necessary chemistry. Given that Cary Grant himself disliked the picture you might expect this one to be a major disappointment but Day’s exuberance is enough to save it.

Day is unemployed computer operator Cathy Timberlake who meets the 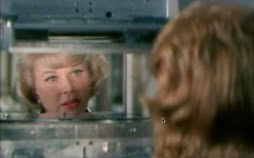 fabulously wealthy Philip Shayne when his car splashes her with mud. The attraction is immediate and he asks her to go away with him to Bermuda, and then on to Paris. As is usual in these movies the plot mostly revolves around finding ways to prevent the two of them going to bed together until they can be safely married at the end.

It’s the sort of movie that tends to get labelled as hopelessly dated by modern critics accustomed to the crassness and obviousness of modern romantic comedies. And as is usual with modern critics, they miss the point of the movie completely. Cathy isn’t battling doggedly to preserve her virginity. She spends much of the movie desperately trying to lose it. The movie make 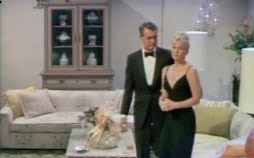 s it absolutely crystal clear that the little getaway that Philip proposes will involve sex and will not involve marriage (we are shown their hotel room and there is a double bed and we are told that that is the only bed in the suite), and it makes it just as abundantly clear that Cathy knows the score and is perfectly willing to accept the arrangement on that understanding.

Even more surprising perhaps is that Philip spends a great deal of money on her without the slightest mention of love. There is certainly at least the implication that Cathy understands that she is offering to have sex with him in exchange for money, or at least in return for some very expensive presents. So much for Doris Day’s reputation as the 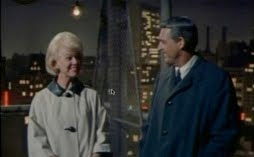 squeaky clean perpetual virgin.
So the movie is, as much as anything, gently mocking the sexual mores of its time.

Grant may have been going through the motions to some extent but he was a professional and his performance is still reasonable. Day is terrific. Gig Young provides great support as Grant’s neurotic business advisor.

The biggest problem is Audrey Meadows as Cathy’s best friend. It’s one of the most annoying performances in movie history. And we see way too much of her.

It has some quite funny moments, and a couple of amazingly risque gags. Even if it’s one of the lesser Doris Day sex comedies there’s a sufficient quantity of romance and humour to provide perfectly acceptable entertainment.
Posted by dfordoom at 11:50 PM