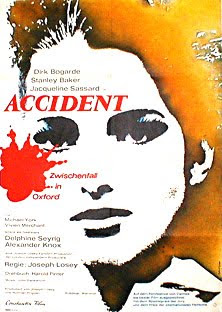 Joseph Losey's 1967 film Accident opens with a fatal car accident. The events leading up to the accident are then recounted in flashback. We see Stephen (Dirk Bogarde), who seems to be a rather shy and retiring Cambridge don and also seems to be a happily married man, a sensitive caring family man. We meet Charley (Stanley Baker) who appears to be much more a man of the world. Charley thinks of himself as a bit of a ladies' man, a bit of a rake. We meet Stephen's wife, who appears to be a rather self-effacing housewife type. And we meet Anna, a young Austrian student who seems to be really just a rather innocent young woman. And William (Michael York), an aristocratic student of Stephen's.

But in this film appearances can be very deceptive indeed. These people are all playing games, sexual and emotional games, and the most dangerous players aren't 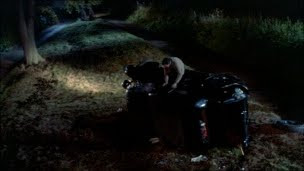 These people use language not to reveal things about themselves, but to conceal them; not to clarify situations but to cloud them.

Director Joseph Losey and his cinematographer, Gerry Fisher, emphasise the disjuncture between what these people say and what they do with a extraordinarily unsettling though rather subtle visual style. Everything seems enclosed, and slightly distorted. Places seem 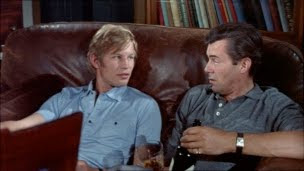 more enclosed than they should be. Scenes are shot through doorways, down stairwells, from disturbing angles, and there seem to be barriers everywhere – fences, gates, doors, everywhere. Stephen and Anna go for a walk in the woods, but rather than open and picturesque English open woodland they find themselves in a thicket that encloses them like a cage.

It looks like they've used a wide-angled lens much of the time to give the slightly distorted feel and the sense that the depth and the scale of the spaces aren't quite right, that things are more claustrophobic than they should be. 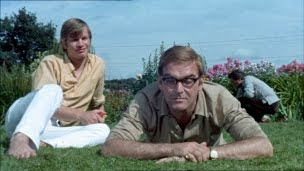 Dirk Bogarde and Stanley Baker are outstanding. Bogarde in particular gives an exceptional performance – there are just so many layers to the character of Stephen, a character so accustomed to living a life of deceit that you wonder if he himself could ever unravel the truth.

Harold Pinter's script is delightfully cynical and deceptive. It combines with Losey's disturbing direction and Bogarde's masterful acting to produce one of the finest British films of the 20th century. You must see this film!
Posted by dfordoom at 9:49 PM