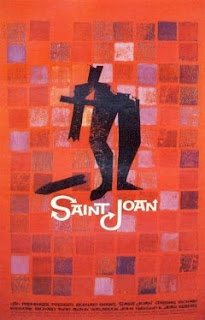 An Otto Preminger movie based on a George Bernard Shaw play and boasting a screenplay by Graham Greene has to be interesting, although the danger perhaps is that with three such considerable egos contributing to the mix the results could be a little confused. In fact Saint Joan is a powerful and memorable piece of cinema.

It’s hardly necessary to give a rundown of the plot except to say that the focus of the movie is more on Joan’s trial than on her military successes, and on the sense of disillusionment and betrayal that she suffered when she found the French court turning against her and discovered that she had gone from being the heroine of the hour to being an inconvenience.

The movie does not end, as you might expect, with Joan’s execution. It ends as it begins, with a dream of the elderly King Charles VII, a dream in which the various players in the tragedy including Joan herself discuss the events in which they were involved. It gives the movie a cynical and anti-heroic tone, even veering towards black comedy rather than tragedy.

The movie adopts a sceptical attitude towards the events it describes, and especially towards the miraculous elements of Joan’s achievements. Without exception the miracles and apparently supernatural aspects are given rational explanations. Joan recognises the Dauphin at once even

though she has never seen him before and even though someone else has been seated on the throne in order to mislead her, but this is attributed to her intelligence and perceptiveness rather than to any other-worldly guidance.

Which is not to say that Joan’s achievements are belittled. As one character so aptly puts it, if she can turn the Dauphin into a king it will be a miracle of impressive proportions! And as the cynical archbishop of Rheims points out, a miracle is anything that can give people faith, whether it be a natural event or not.

Preminger had a reputation for taking a neutral stance towards his characters, avoiding any attempt to emotionally manipulate his audience into taking either a favourable or unfavourable view of them. This approach is seen to perfection in Saint Joan.

Even the least sympathetic characters are three-dimensional, and any evil that they do is done for reasons that seem perfectly acceptable to them. The Earl of Warwick and John de Stogumber adopt very dubious means to bring about Joan’s death, but they do so for reasons of state. Warwick feels no personal animosity towards her; he merely feels that her death is a political necessity. And he’s a likeable and engaging personality. 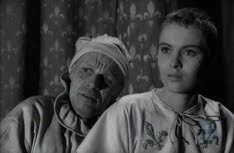 The Dauphin is cowardly, manipulative, selfish and sly. But he’s very human. Like everyone else who plays a part in Joan’s downfall his actions are motivated by human weaknesses rather than by malice or evil.

Preminger assembled an impressive cast for this production. Some of his casting decisions were extremely bold but they worked. Richard Widmark would not have an obvious choice to play the Dauphin, later to become King Charles VII, but his shifty, twitchy, jumpy performance is absolutely perfect. John Gielgud is all reptilian charm as the Earl of Warwick. Felix Aylmer, always one of my favourite British character actors, gives what is possibly a career-best performance as the Chief Inquisitor. He feels great pity for Joan, he wants to give her every chance to avoid the stake, but at the same time he takes his duty to stamp out heresy very seriously and believes that the dangers of heresy are so great that one must be very reluctant to show mercy. He’s a complex and conflicted character, a man doing an unpleasant job that he believes to

And then of course there’s Jean Seberg as Joan. Preminger was very excited by his new acting discovery and it’s easy to see why. She’s tough, determined, naïve, headstrong and exasperating. This is a Joan who to a certain extent brings about her own downfall. Having tasted the heady wine of power and adulation she finds she cannot give them up, and this leads her on to destruction. She admits from the beginning that the voices she hears in her head are probably the products of her own mind, but then perhaps only madness can ever give a person the supreme self-confidence to achieve heroic deeds.

Preminger keeps the feel of the movie rather stagey, as he had done earlier in The Man with the Golden Arm. He clearly wanted to avoid an epic treatment, and chose not to shoot the film in Technicolor or Cinemascope as would have been expected in a movie of that era dealing with such heroic subject matter. The movie was a commercial failure at the time. Movie audiences in 1957 were not ready for such a cynical view of heroism.

A great film by a great director, and an absolute must-see.
Posted by dfordoom at 11:11 PM