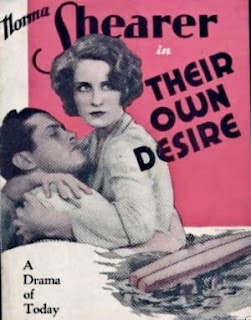 I generally enjoy Norma Shearer’s movies but Their Own Desire is definitely not one of her best pictures.

This overheated 1929 MGM melodrama just doesn’t quite make it. I think my biggest problem with this one is that I found it impossible to care very much about any of the characters, even when they find themselves in situations that should evoke sympathy.

Shearer is Lally Martlett, a rich and slightly wild young woman who is devoted to both her parents. Her life is carefree and blissful until a certain Mrs Cheever enters the picture. Lally dislikes her, and her suspicions turn out to be well-founded. Her father is having an affair with Mrs Cheever, an affair that leads inevitably to divorce, and to a suicide attempt on the part of Lally’s mother. 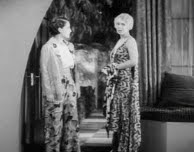 Things get complicated when Lally meets a rather nice young man. Jack is totally smitten by her and Lally is inclined to return his affections. Wedding bells seem to be in the offing until the young lovers make a dreadful discovery. Jack is Mrs Cheever’s son! How can she marry the son of the woman who wrecked her parents’ marriage?

y isn’t one of my favourite actors but he’s reasonably good as Jack. Lewis Stone does his usual fatherly turn as Lally’s dad. I found Shearer to be just a tiny bit annoying in this movie. That may be because the sound quality is not the best on this very early talkie and her voice seems a little shrill at times.

The most interesting aspect of the movie is the behaviour of Lally’s mother. Is she the victim, or is she a manipulative and clinging woman who is prepared to sacrifice her daughter’s happiness on the altar of her own bitterness? I’m not sure how we’re expected to view the mother. It might be a case of social attitudes having changed so much since 1929 that a character who was intended to provoke feelings of pity in the audience now comes across as being

rather suffocating and dependent and even manipulative.

I suspect that audiences at the time would also have judged the father more harshly than an audience of today. The movie does at least raise the issue of the difficulty of reconciling the search for individual happiness with loyalty towards family.

There’s not very much pre-code about this movie apart from a recognition that the reality of marriage doesn’t always live up to our ideals or our fantasies.

I couldn’t really warm to this movie but it’s probably worth a look if you’re a Norma Shearer fan.
Posted by dfordoom at 7:06 PM