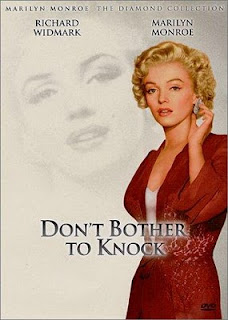 Monroe plays a young woman with problems who gets a job as a babysitter in a New York hotel. Richard Widmark is also good, as a man who tries to make an assignation with her but gets more than he bargained for. Anne Bancroft, in her first film role, is very good as Widmark’s torch singer girlfriend who has just told him it’s all over between them. And the always entertaining Elisha Cook jr is extremely entertaining as Monroe’s uncle who works as an elevator operator at the hotel.

e is exceptionally subtle and very moving as she gradually loses her grip on reality, and it’s free of those annoying mannerisms that she adopted in so many of her movies. Versatile and underrated British director Roy Ward Baker does a solid job and the tension is maintained very effectively.

One of Monroe’s less known films, but one of her best. Not quite a film noir but very close to it in style and substance.

This movie and Niagara (which is certainly a film noir) gave Monroe her strongest straight dramatic roles and in both cases she acquits herself admirably.

Interestingly enough Monroe doesn’t sing, but Bancroft does. Well her character does anyway although the voice was dubbed.
Posted by dfordoom at 2:30 PM