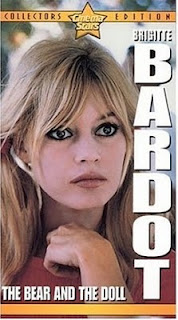 The Bear and the Doll (L'ours et la poupée) is a 1969 Brigitte Bardot romantic comedy. Like many of Bardot’s movies what it really has going for it is Bardot, but that’s enough.

Bardot is, well I’m not sure what she is really. It’s 1969, so she’s one of the Beautiful People. Maybe she’s a model. What Felicia (her character) mostly does is wear gorgeous clothes, go to parties, and divorce husbands. Then one day, while driving the Rolls-Royce belonging to one of her x-husbands, she has a minor traffic accident. Surprisingly, the Roller comes off much wore than the other car, a little Citroen 2CV. The Citroen is driven by Gaspard, a ’cello player. Unfortunately Felicia forgets to obtain Gaspard’s signature on the accident report for the insurance, so now she has to find him.

Tracking him down isn’t too difficult, but there’s something about Gaspard that bothers her. He doesn’t want to sleep with her. All men want to sleep with her, so she takes this as a bit of a personal affront. And a challenge. She manages to manoeuvre him into driving her back to his place. Gaspard lives in a farmhouse in the country (and Felicia had never imagined that the countryside actually existed in reality) with his numerous offspring. But without his wife, who has left him. So he’s basically single, and yet he still doesn’t want to sleep with Felicia! Felicia decides more drastic measures are called for. 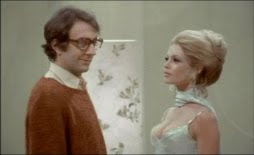 That’s pretty much it for the plot - Felicia’s inventive and imaginative ploys to get Gaspard to go to to bed with her.

It’s very very lightweight, and you need to have a fairly high tolerance for the whole Swinging 60s thing (which luckily I do have). This is a very 60s film.

Jean-Pierre Cassel is reasonably amusing as Gaspard. But the movie belongs to Bardot. It’s fairly typical of the Bardot movies I’ve seen in that the character she is playing is a wildly eccentric blonde. You could even describe her as a completely and utterly insane blonde. But she’s definitely not a dumb blonde. And Bardot can take a character who could easily become annoying and make her charming and likeable. 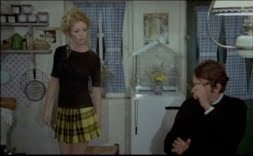 And fortunately, since this is after all a romantic comedy, Bardot is (as always) very funny.

It’s a movie that will most likely only appeal to Bardot fans, but if you fall into that category it’s a good deal of fun.

I’m told that there’s an American DVD release from Koch Vision that is very very poor indeed, with major image quality issues and a very bad English dub. In fact it’s apparently fullscreen and in black-and-white. I saw the movie on cable on World Movies and it looked superb and was presented in French with sub-titles courtesy of SBS Australia, and in very impressive colour and in its correct aspect ratio. So don’t judge this movie by reviews of the American DVD release.
Posted by dfordoom at 11:52 PM