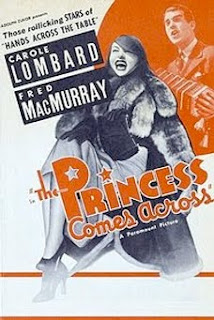 I’m now more than halfway through the Carole Lombard Glamour Collection boxed set and I’m totally hooked on Lombard. Even in a movie as flawed and as odd as The Princess Comes Across her magic shines through.

This time she’s a Swedish princess, Princess Olga. Yes, Carole Lombard as a Swedish princess is a bit of a stretch but if you keep watching you’ll find that things are not quite as they appear. Lombard seems to be giving a good-natured impersonation of Greta Garbo which adds to the fun. Princess Olga is setting off on an ocean liner on a voyage to the United States where is to sign a contract to make motion pictures. The combination of royalty and Hollywood has endured a huge crowd to send her off and an equally enthusiastic reception is expected at the other end of her voyage

And she’s once again teamed with Fred MacMurray. The more I see

of his guy’s early movies the more I like him. He really was a gifted comic actor and he and Lombard always have great chemistry. MacMurray is a band leader named King Mantell who takes a shine to Princess Olga. He serenades her with his concertina. And what girl can resist a man with a concertina?

The movie starts out as if it’s going to be a screwball comedy and then suddenly becomes a murder mystery. There’s nothing wrong with combining those two genres, it was done with outstanding success in The Thin Man (and Paramount were clearly hoping to emulate the success of that film) but in this case the results are awkward. It doesn’t quite make it in either genre.

The murder mystery plot concerns an escaped convict who has somehow found his way on to the ocean liner. He’s a master of disguise so he could be anyone. Conveniently the passenger list just happens to include five famous detectives from various parts of the world. They don’t make much headway catching the criminal and soon a corpse turns up so now things are getting very serious.

While all this is going on the band leader continues his romancing of the princess. There’s also a blackmail sub-plot, and it transpires that they both have something to hide.

It all sounds like it could work rather well but unfortunately there are problems. Neither the mystery sub-plot nor the romantic sub-plot are fully developed, and the mystery angle isn’t done with sufficient skill to really capture the viewer’s interest. There’s also not enough scope given to develop the romantic chemistry that Lombard and MacMurray demonstrated with so much sparkle in Hands Across the Table a year earlier.

So it ends up being a movie with very little going for it. But it does have Carole Lombard, and that’s enough. She has to more or less carry the movie single-handedly and she’s equal to the challenge. It’s a delightful performance and she makes this slightly odd movie well worth watching.
Posted by dfordoom at 7:35 PM