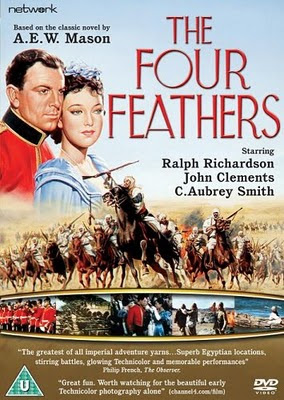 The Four Feathers was one of the most spectacular productions of the 1930s British film industry. It’s a rousing and highly entertaining tale of imperial adventure.

Hungarian-born producer Sir Alexander Korda was one of the boldest figures in Britain’s film industry. He was a man who believed in thinking big. If a project was going to require a big budget then he would back his judgment and take the risk. In most cases his judgment proved to be sound.

Based on a very successful novel by A. E. W. Mason and with a screenplay by R. C. Sherriff, this 1939 version (there have been several others) was directed by Sir Alexander Korda’s brother Zoltan Korda, with production design by yet another Korda brother, Vincent.

The Favershams have ben a military family for generations. One Faversham after another has served his country on battlefields all over the globe. General Faversham was in the Crimea in 1854 with the Thin Red Line. It is now 1885 and General Gordon has just been killed at Khartoum. The Empire will soon need to call on the services of yet another member of the family, young Harry Faversham. The General feels it is time for the 15-year-old Harry to start taking an interest in his future career, which will of course by the army, and will of course be a commission in the General’s old regiment, the 68th Regiment of Foot.

Unfortunately young Harry is not made of the same stern stuff as earlier scions of the Faversham family. His dreams are not of military glory. But being a Faversham he has no choice in the matter.

Just over a decade later the 68th is about to set off to join Kitchener’s army in the Sudan. Gordon is to be avenged at last. The men of the 68th are excited by the prospect. Harry Faversham’s friend Captain John Durrance is certainly excited. He is keen for something to take his mind off Ethne Burroughs. He had hoped to marry this young lady, but she chose another man. In fact she chose Lieutenant Harry Faversham.

One man however is not eager to set off - Lieutenant Harry Faversham. The day before the regiment is to depart for Egypt he resigns his commission. He has decided that he should devote himself to the management of the family estate and to his new bride, and that the pursuit of military glory is mere futility. The following day a package arrives for Harry. It contains three white feathers, a clear accusation of cowardice. The look on Ethne’s face causes Harry to remark that should have been four feathers, since her look plainly conveys her own belief that her husband is indeed a coward.

The problem for Harry is that he knows in his heart of hearts that the accusation is quite just. He is a coward. Now he has two honourable choices left to him. He can blow his brains out, or he can find a way to redeem himself. He chooses the latter. He travels to Egypt, adopts the disguise of a Sudanese tribesman and sets off into the desert to find his regiment, and thence to find either death or redemption.

Stirring tales of manly adventure and heroism are out of fashion these days, which is one of the many things wrong with the modern world. This is a great story, superbly told.

John Clements plays Harry and he’s quite adequate although inevitably overshadowed by Ralph Richardson as John Durrance. It’s a role that gives Richardson plenty of opportunities for scenery chewing, a temptation he never could resist. C. Aubrey Smith can be annoyingly pompous but in this case he’s perfectly cast as General Faversham. John Laurie, a Scottish character actor who appeared in countless movies in a lengthy career, is an odd choice to portray the fanatical Moslem leader, the Khalifa. Somehow he manages to suppress his extremely broad Scots accent and he’s quite good.

The movie’s great strengths though lie in the visual department. The battle scenes are spectacular. Korda’s movies always looked handsome and this is no exception.

I caught this on Australian TV but I believe it’s available on both DVD and Blu-Ray. It’s one of those rare movies that really would justify the existence of the Blu-Ray format. A fine movie for those who enjoy historical epics. Recommended.
Posted by dfordoom at 9:15 PM