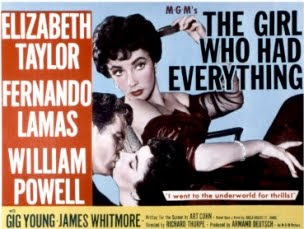 While it’s been described as a rather loose remake of the pre-code classic A Free Soul it’s probably better to regard MGM’s 1953 The Girl Who Had Everything as a completely different film.

Elizabeth Taylor had made the transition from child star to adult star in spectacular style in 1951’s A Place in the Sun. Her subsequent movies for MGM were a bit of a mixed bag and The Girl Who Had Everything is certainly not a high point in her career. At the same time it’s nowhere near as bad as its reputation would have you believe.

It’s also notable for being William Powell’s final movie at the studio, and in fact one of his last movies.

Powell is Steve Latimer, a very successful lawyer who is not unduly troubled by a conscience. He treats his profession as a bit of a game; in fact that’s how he treats life in general. He is happy to defend gangsters - it’s all part of the sport. So he has no ethical objections to representing gambling czar Victor Raimondi (Fernando Lamas) before a senate inquiry into gambling and organised crime.

Latimer is a widower who has raised his daughter Jean (Elizabeth Taylor) to approach life in much the same manner. They both pride themselves on being free spirits who regard society’s rules with a certain amount of scorn.

And now the chickens are coming home to roost for Steve Latimer. He’s about to discover that perhaps this was not the ideal way to raise a child. Jean has become infatuated with Victor Raimondi. He’s good-looking and he is even more contemptuous of society’s rules than the Latimers. He’s a handsome sexy bad boy and Jean wants him. And she means to have him.

Now Steve Latimer will find out that when you’ve taught your daughter to make her own decisions she’s likely to do just that, even when those decisions are clearly going to have disastrous consequences. And Jean will find that dating a mobster isn’t always as much fun as she thought it would be.

When Steve discovers that Jean and Raimondi are lovers and that they intend to get married he decides the time has come to take drastic action. He resolves to destroy Victor Raimondi before Raimondi destroys his daughter. Of course destroying a gangster who has never had any qualms about committing murder is liable to be a dangerous undertaking.

Fernando Lamas is adequate as Raimondi. Gig Young plays Jean’s very respectable former boyfriend but is given very little to do. William Powell was 61 but the charisma and the charm are still there and he’s extremely good. The 21-year-old Taylor is in complete control and could already play this sort of role with effortless ease.

This is by no means a great movie but Powell and Taylor give it a touch of class. It has the feel of a B-movie with A-movie stars.

It’s hampered to some extent by the Production Code but it still manages to make it clear that Jean and Raimondi are sleeping together. It’s the father-daughter relationship that is the key, and the conflict between being a free spirit and being a responsible adult. Both Steve and Jean have to learn to grow up, fast. The movie handles this reasonably well.

Adequate entertainment, worth seeing for the performances of William Powell and Elizabeth Taylor, and for the opportunity of seeing Taylor at her most breathtakingly beautiful (and wearing some truly stunning clothes).
Posted by dfordoom at 10:43 PM