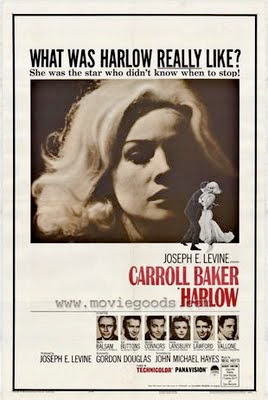 They just don’t make movie trash the way they used to. Hollywood still makes bad movies but today they make boring bad movies. In the 50s and 60s they made gloriously entertaining trash epics like Harlow.

It’s supposed to be a biopic about Jean Harlow. In fact it’s mostly fiction. I presume they were worried about being sued and so the names of just about everything have been changed. Not just the people, but even the names of the studios and the movies she made. The manner of her death has been changed and in the movie she has one disastrous marriage. In real life she was married three times.

So it’s best to simply accept the movie as fiction, as a movie about a star like Jean Harlow.

The movie’s approach to the material is sensationalistic, lurid and breathless. And vehemently high camp. Not that I have a problem with any of those things. Fortunately it doesn’t take half measures. It goes wildly over-the-top and succeeds through sheer excess and bad taste.

Carroll Baker plays Harlow and she’s the movie’s single biggest strength. Baker is sexy enough and outrageous enough in her own right to get away with the role. I’ve never understood why Baker didn’t have a more successful career in Hollywood. She’s a whirlwind of misdirected sexual energy, and rather like other notable roles Baker played (such as the title role in Elia Kazan’s Baby Doll) she’s a delirious mixture of innocence and wantonness.

Mike Connors is better than you might expect as a male star who pends most of the movie trying to persuade Harlow to marry him. Red Buttons can be an annoying actor but as her devoted agent he’s well cast. Angela Lansbury and Raf Vallone overact amusingly as her appalling parents. As depicted in this movie her mother is a sex-crazed matron who has married a reckless but good-looking gigolo.

The key character is Paul Bern, played by Peter Lawford. In this biopic Paul Bern is the first husband of a virginal Harlow. In reality he was her second husband but the marriage was every bit as catastrophic, culminating in Bern’s suicide shortly afterwards, presumably unable to deal with his inability to consummate the marriage. For the movie version of Paul Bern the shame of being married to Hollywood’s number one sex goddess and being unable to perform in bed is too much. And it’s just too much for Harlow, in this movie presented as a woman who has saved herself for marriage and then realises she might a well have not bothered.

Director Gordon Douglas had an interesting career and handles his task pretty well.

Apart from Carroll Baker the movie’s other big asset is its visual style. Everything is too bright, too colourful, too garish, too brightly lit, too glossy and too shiny and in thoroughly deplorable taste. This is total kitsch overload. And it works perfectly. It’s Hollywood given the full Hollywood treatment. The sets are like temples dedicated to the gods of camp.

Olive Films have gained the right to release quite a few previously unavailable Paramount movies like this one. There are no extras whatsoever but the transfer is superb.

If you can’t disregard the fact that the movie gets just about everything about Harlow’s life wrong you’re probably well advised to skip this one. But if you can, and if you’re in the mood for trash on the epic scale just lie back and enjoy.
Posted by dfordoom at 10:43 PM