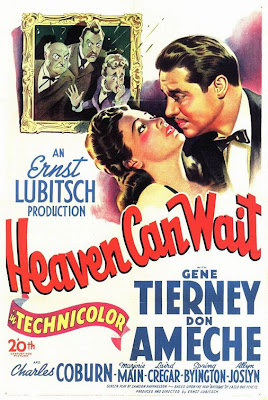 I hate to say this about an Ernst Lubitsch film but I was just the tiniest bit disappointed by Heaven Can Wait (1943).

It’s not that there isn’t a great deal to enjoy here. But it drags a little in the later stages. It’s just a bit too long, and a bit too sentimental. The last half-hour in particular is heavy going. The famed Lubitsch Touch becomes at times a little heavy-handed.

Perhaps the problem is that I'm mostly familiar with Lubitsch for his pre-code movies such as Design for Living and Trouble in Paradise. Aside from that I've seen a couple of his early German movies and I've seen Ninotchka but that was so many years ago that my memories of it are rather hazy.

Henry van Cleeve has just died, at the age of 70. He assumes they’ll be waiting for him in Hell. While he’s unquestionably spent much of his life pursuing the ladies the manager of Hell (or His Excellency as he’s referred to in these modern times) is a trifle confused. He hasn’t received the paperwork so he invites Henry to tell him why he deserves eternal damnation. The bulk of the movie then consists of flashbacks covering Henry’s lifetime.

Henry was born into a prosperous New York family and has never had to face the disagreeable necessity of working for a living. He has devoted his life to pleasure. At the age of 16 the French maid introduced him to the pleasures of drunkenness and women and he’s never looked back.

Henry’s pursuits of sensual pleasures has not stopped him from falling in love. For Henry this was a once-in-a-lifetime thing. Martha (Gene Tierney) was engaged to be married to Henry’s virtuous cousin Albert but Henry persuaded her to elope with him. The marriage had its problems (mostly caused by Henry’s weakness for the ladies) but against the odds it’s been quite successful. While he’s never been able to renounce philandering Henry has been, in his own way, a devoted husband and a good father to their son.

The real masterstroke in this movie is the casting of Don Ameche. The fact that he was never more than a very minor star proves to be an asset. It makes the character more believable as an essentially mild-mannered amiable nonentity.

Henry has spent his whole life trying to be wicked. He has been at best moderately successful. We can be sure that he has over-indulged in alcohol but he’s undoubtedly proved to be a harmless and even rather likeable drunk. And while he’s almost certainly been unfaithful to his wife we can be equally sure that he hasn’t been unfaithful as often as he’d have liked to be. He’s too nice a guy to be entirely successful as seducer, and he’s the sort of guy who hates the idea of actually hurting anyone. Which does tend to cramp your style if you’re trying to be wicked.

And we can be absolutely certain that while he might have betrayed his wife sexually he has never done so emotionally. He’s always been hopelessly in love with her. He just has this idea of himself as being rather wicked. Chasing chorus girls is simply something one has to do in order to maintain such an image. Don Ameche captures this quality of striving for the appearance of wickedness without ever quite achieving the substance exceptionally well.

Unfortunately the other characters remain very two-dimensional. Gene Tierney does her best but Martha is a rather insipid character and there’s not much for her to get her teeth into.

Laird Cregar is great fun as the Devil. He’s very civilised and runs Hell more like a rather fancy hotel. Unfortunately his role is all too brief.

Lubitsch was often credited with bringing a sophisticated European sensibility to Hollywood movies. This movie does take a rather tolerant view of infidelity so I suppose that qualifies as sophistication. There’s much gentle amusement to be found here but perhaps I was just expecting too much. It’s worth seeing, but can't compare at all to masterpieces like Trouble in Paradise.
Posted by dfordoom at 5:30 PM