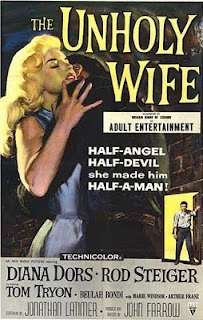 While she’s often been described as Britain’s answer to Marilyn Monroe Diana Dors was in fact an established star when Monroe was still a complete unknown. And to an even greater degree than Monroe, and even more unjustly, Diana Dors was fated to have her abilities as a serious actress overshadowed by her blonde bombshell image and her eventful private life. In 1956 she signed with RKO and set off for Hollywood, The Unholy Wife being one of the results.

The plot of this movie is promisingly lurid. It unfolds in true film noir style with the entire story being told in flashbacks and with voice-over narration by Dors’ character, Phyllis Hochen. The backstory is filled in by a flashback-within-a-flashback. Phyllis was a good time girl and when Paul Hochen and his buddy Gino walk into a bar in LA she and her girlfriend recognise them immediately as good prospects. They’re obviously wealthy, middle-aged, from out of town, and from the country. The girls are only too willing to be picked up. Phyllis and Paul spend a romantic weekend together but for Paul it’s more than just a passing dalliance. He’s head over heels in love, and much to her surprise he proposes marriage.

A year later they’re living in a rural valley north of an Francisco where Paul owns a vineyard, but the marriage is not going so well. Phyllis is bored by rural life, and she’s bored with Paul. She’s even more bored by his family and his friends. She’s young, she wants to have a good time. And she is having a good time, with her lover San. 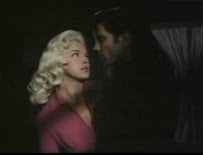 Then a fatal temptation is placed in her path. Paul’s elderly mother is convinced she has heard a prowler. Phyllis takes Paul’s revolver and fires off a few rounds into the darkness, mostly to relieve the boredom and to upset the old lady. And an idea occurs to her. Nobody would be suspicious if a young woman alone in a house with only an elderly woman got frightened when she heard a prowler and fired at a man coming through the front door. If that man happened to be her husband, why then of course it would be written off as a tragic accident, and there would be much sympathy for the attractive young widow.

Unfortunately the man who comes through the door isn’t Paul, but Phyllis is nothing if not resourceful. She quickly works out a way to make Paul take the blame. 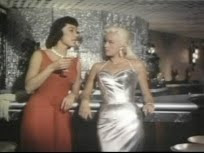 wrong with the plot. Great crime movies have ben made from flimsier plots than this. It’s the execution that is the problem. Australian-born director John Farrow must bear much of the responsibility. His direction is turgid and lifeless. Farrow had directed The Big Clock a decade earlier and it’s a delightful tongue-in-cheek romp of a movie. Perhaps the problem is that Farrow had become a convert to Catholicism, and this is a very, very Catholic movie. Paul has a brother who is a Catholic priest and his sole function in the plot is to act as God’s instrument and to bring the wicked to judgment and to salvation. When it comes to the ending Farrow seems unsure if we’ve got the point so he beats us over the head with it repeatedly.

Another huge problem is the acting. Rod Steiger is truly awful as Paul. Arthur Franz as his priest brother is even worse. Tom Tryon is deadly dull as Phyllis’s lover San. Perhaps audiences in the 50s would have seen it differently but a modern audience will undoubtedly see 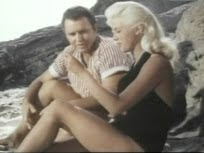 the virtuous characters in this movie as, without exception, mealy-mouthed, annoying, smarmy, self-righteous prigs.

With all those flaws you might think this movie is not worth seeing. Actually you’d be wrong, because it does have one huge asset. It has Diana Dors. She’s fabulous. She plays up the whole bad girl thing but there’s more to her character than that. Not only is she the only member of the cast who can act, hers is the only character with any light and shade to it. She tells Paul before she marries him exactly what kind of woman she is. He can’t say he wasn’t warned. Phyllis has a son by a previous relationship (it’s implied but not stated that she wasn’t married to the child’s father). And she tells Paul she’s a bad mother. 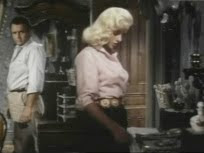 The print screened by TCM in Australia was truly atrocious - dark and muddy with washed-out colours and a very soft picture. Which makes it hard to recommend this movie, but Diana Dors makes it worthwhile.

Interesting trivia: While Rod Steiger and Diana Dors don’t generate much sexual chemistry on-screen apparently it was a different story off-screen, which resulted in something of a scandal (they were both married to other people at the time).
Posted by dfordoom at 10:26 PM