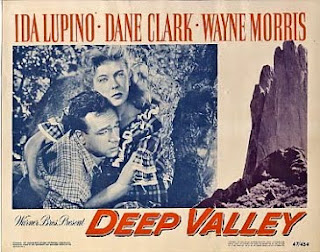 Deep Valley, Ida Lupino’s last film for Warner Brothers, is sometimes described as a film noir. You probably have to define film noir fairly broadly to accommodate this one but I think it can just about qualify. In any case it’s an interesting movie in its own right.

Directed by Jean Negulesco in 1947, it combines crime and romantic melodrama. Ida Lupino is Libby, who lives with her parents on a rundown farm in an isolated valley. They live like hillbillies and it’s a very troubled family. The father has a chip on his shoulder and a tendency to see himself as a victim. Years earlier he lost his temper and hit his wife. She took to her bed and became a permanent professional invalid. She hasn’t been downstairs for years. Libby witnessed the incident and the shock left her with a speech impediment and caused her to withdr

aw totally from the world.

Then comes the day when a road is being built, a road that will end the valley’s isolation. It’s being constructed by a convict chain gang. Libby watches fascinated from the top of a hill. Of course it’s quite possible that the sight of a group of young, fit, half-naked men doing hard physical work is of more interest to her than the actual road construction! One convict in particular catches her eye. I think we’re certainly meant to assume that Libby is sexually repressed and that she’s now about to experience a belated awakening of her sexuality.

When the overseer brings a group of convicts to the farm to fetch some water he catches her eye again, and he notices her with equal admiration. One of the guards makes an unfortunate remark, and the convict (we later find out his name is Barry) slugs him. He is punished by being locked in a toolshed and threatened with having an extra five years added to his sentence. That night a violent storm causes a disastrous landslide. Many of the convicts are killed, and several (including Barry) take the opportunity to escape.

ng during the storm. Her father strikes Libby and she takes off for the woods with her dog. She intends to set up solitary housekeeping in a small cabin but then Barry turns up. They recognise each other as outsiders who’ve been misunderstood, and they fall hopelessly in love. But the posse is out in the woods searching for him, so what future is there for this ill-starred couple?

There are quite a few interesting things about this movie. Barry is in many ways a typical noir hero. He was originally sentenced for manslaughter but he was never an actual criminal, just a hot-headed guy lacking in self-control whose volatile and violent temper as destined to land him in continuous trouble. In a key scene he tells Libby that he’d never thought of himself as a criminal, but now he realises that his temper has made him one.

And Barry is quite similar to Libby’s father. He’s also not really a bad man, just weak and self-indulgent and unwilling to take

responsibility for his temper. Like Barry he isn’t truly cruel or vindictive. They both regret their actions afterwards but seem unable to learn from their mistakes. Libby’s problem is that she’s now fallen in love with a man so much like her father.

While it’s set entirely out in the backwoods it’s shot very effectively in a very film noir style, with even some hints of German Expressionism. Visually it’s quite impressive.

The acting is generally good, with particularly good performances by Lupino and Dane Clark as Barry. They’re both very intense and this adds to the sense of desperation in their love. They work exceptionally well together.

Deep Valley is a rather obscure movie that is well worth seeking out. Unfortunately I’ve heard that the Warner Archive DVD-R is atrocious. My copy was recorded from TCM and they certainly managed to find a beautiful print. It’s definitely worth setting the recorder for this one.
Posted by dfordoom at 9:52 PM