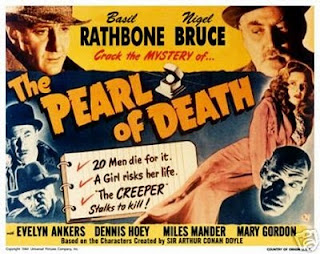 The Pearl of Death was the seventh of the twelve Basil Rathbone Sherlock Holmes movies made by Universal during the 40s, and one of the best.

There was a time when Basil Rathbone was regarded as the greatest of all screen Sherlock Holmes, but that was before Jeremy Brett came along in the 80s. Brett’s performances blew all previous interpretations of the role out of the water. While there’s absolutely no question that Jeremy Brett is the definitive Sherlock Holmes and that his performances will probably never be equalled it has to be said that the 1940s Universal movies have their own charm. They are still very much worth seeing.

The decision to move Sherlock Holmes into the contemporary world of the 40s might seem to have been a very bad idea but it actually worked quite well. And in fact these movies have the feel of movies that take place in a kind of indeterminate point in space and time. For me they take place in an imaginary London that borrows elements from the 1890s, the 1940s, and very decade in between. The only thing that positively dates this particular movie is a car that pursues Holmes and Watson, and it’s a car that looks a lot more 1920s than 1940s. 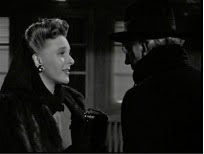 The movie opens on the Boulogne-Dover steamer (which immediately suggests that this particular picture must have a pre-war setting) with the attempted theft of the fabulous Borgia pearl. Holmes foils the theft. He returns the pearl to its rightful owners and it goes on display in a museum. Holmes makes the observation that this pearl has already led at last twenty men to their deaths and it’s his opinion that it will continue to exact a price in blood from those who own it and those who covet it.

The pearl is safely ensconced in a London museum, protected by the most advanced alarm systems, but Holmes’ ill-advised attempt to test the effectiveness of the museum’s security leads to the theft of the pearl. Holmes realises he is dealing with a master criminal, a fiend named Giles Conover. And Co 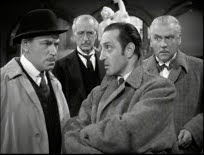 nover and his partner-in-crime Naomi Drake seem to have temporarily at least got the better of the great detective.

Roy William Neill directed most of the Universal Holmes movies and was largely responsible for the success of the series. He was a skillful and economical director with a sure sense of pacing. He made horror movies and film noir as well as and he gave the Holmes movies a slight flavour of both the gothic and the film noir, qualities which added considerably to the atmosphere of these films. He was one of the most talented B-movie directors in Hollywood until his premature death in 1946

Rathbone’s Holmes is generally a more confident Holmes than Brett’s but The Pearl of Death is interesting in that it reveals the master detective’s fatal weakness. It is his arroga 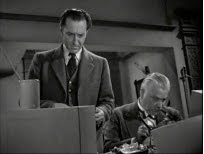 nce that causes him to make a colossal blunder, a blunder that leads to the loss of the Borgia pearl and threatens to destroy his own reputation. This makes The Pearl of Death one of the most absorbing entries in the Universal cycle. Holmes is well and truly on the defensive. This inspires Rathbone to give one of his finest performances.

The supporting cast is also very capable. In fact this movie has no obvious weaknesses at all. It has a taut script, crisp direction and fine actin. And although these were B-movies they were highly profitable B-movies made by a major studio and the production values are quite impressive. This is a very professional and very handsome movie. And it’s also thoroughly enjoyable. The Scarlet Claw might be the best of the Universal Holmes movies but The Pearl of Death is not far behind. Highly recommended.
Posted by dfordoom at 10:15 PM