Before the well-known TV series of the 1950s and 60s there had been a string of Perry Mason movies, with several actors playing the role of Erle Stanley Gardner’s famous criminal lawyer and detective. The best-known of these was Warren William who payed the role in four mid-1930s movies, including The Case of the Lucky Legs in 1935.

In this movie Perry Mason investigates some sharp practices, culminating in a murder, surrounding a beauty contest. The young lady who wins the Lucky Legs competition is very pleased until she finds out she’s not going to get her prize money. Her elderly admirer hires Perry Mason to investigate but whe 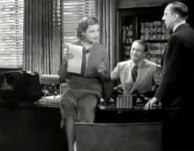 n a corpse turns up it becomes apparent that the case is more serious than it seemed to be.

At first glance the most surprising thing about these 1930s movies is that they’re played mostly for laughs. But then when you consider the enormous hit that MGM had with The Thin Man perhaps it’s not so surprising. Combining comedy with a murder mystery must have seemed like a sure-fire recipe for success.

I’m not so certain it was such a good idea. Warren William was the perfect actor for the part. He had the right blend

of arrogance, charisma and charm with the right slightly sardonic view of the world. But I think he’d have been a lot better simply playing the role straight.

For my tastes the humour in this movie is much too broad, especially when Mason’s sidekick Spudsy (Allen Jenkins is on the scene. He’s like the worst kind of comic relief from 1930s Hollywood movies but with a bigger part so there’s even more of him to be annoyed by.

On the plus side the other actors are reasonably good. Genevieve Tobin makes a fairly good Della Street.

There’s a good mystery film here, if only it had been played as a straight mystery without the comedy.
Posted by dfordoom at 5:03 PM