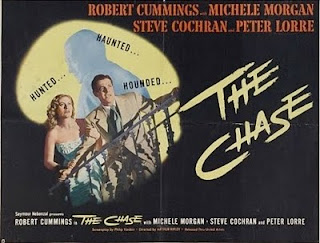 The Chase is a film noir, but being based on a Cornell Woolrich story it’s a film noir with some unexpected twists that make it very much worth seeking out.

Chuck Scott (Robert Cummings) has been finding life a struggle since leaving the Navy. He’s so broke he can’t even afford to buy himself breakfast, and then it seems like maybe his luck has changed. He finds a wallet containing $81. But he’s a perversely honest sort of guy so after spending $1.50 on breakfast he decides to return the wallet and the money to its rightful owner.

man. Eddie has both a short temper and a sadistic streak. When the girl who’s manicuring his nails accidentally slips and hurts him she earns a brutal slapping, and then straight away Eddie switches back to his usual charming demeanour. But it’s a chilling and creepy kind of charm.

Eddie is so amused at Chuck’s honesty that he offers him a job as a chauffeur, a job that mostly entails driving Eddie’s wife around. Lorna Roman is terrified of her husband and she confides in Chuck, who is the kind of guy th

at women always confide in, and also the kind of guy who always ends up trying to rescue damsels in distress. Chuck and Lorna figure if they can jump on a freighter bound for Cuba they might have a chance of getting away from Eddie. But realistically their chances of escaping seem rather slim.

At this point the movie takes a sudden unexpected turn which I won’t spoil by revealing any details except to say that things are not what they seem.

Steve Cochran gives a bizarre but effectively frightening performance as Eddie Roman. Peter Lorre is equally sinister in a different way as his chief lieutenant Gino. They mak

e a terrific combination. Robert Cummings is reasonably good as Chuck while Michèle Morgan is suitably tortured and mysterious as Mrs Roman.

Director Arthur Ripley had a long career as a writer in Hollywood but directed comparatively few films. He does a fine job with The Chase.

An excellent offbeat psychological film noir, and a must for Woolrich fans.
Posted by dfordoom at 3:56 PM