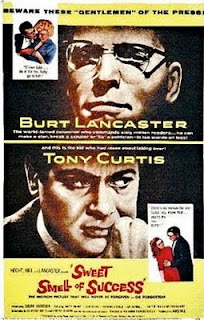 Sweet Smell of Success comes very close to the end of the classic film noir cycle, but it’s one of the very greatest examples of film noir ever made.

Tony Curtis is Sidney Falco, a sleazy press agent who is determined to get to the top. To do this he needs some help from columnist J.J. Hunsecker (Burt Lancaster). Hunsecker’s column can make or break careers on Broadway, and Hunsecker can make or break press agents. He’s a man who doesn’t give anything away so if Sidney wants coverage for his clients in Hunsecker’s column he’ll have to do the great man. A very big favour. A very unpleasant favour. But Sidney is entirely untroubled by moral scruples so he’s prepared to do it.

Hunsecker’s sister is in love with a jazz guitarist and Hunsecker is determined to sabotage their love affair. But he can’t be seen to do it himself. That’s where Sidney comes in. Sidney has a plan worked out that will remove th 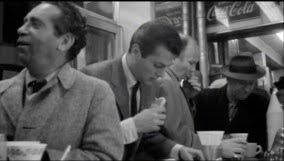 e guitarist from the scene, a rather vicious little smear campaign. But while Sidney is a moral vacuum he gradually comes to realise that Hunsecker is not just morally bankrupt but dangerously crazy with something of a God complex.

There’s a clear implication that Hunsecker’s feelings for his sister have an incestuous element to them. This had to be suggested subtly in 1957 but Burt Lancaster makes the character so disturbing and makes his interactions with his sister so creepy that the implication is fairly plain.

Lancaster and Curtis both deliver magnificent bravura performances. Tony Curtis must be one of the most underrated Ho 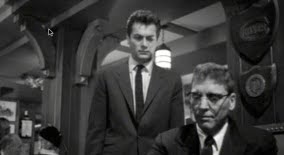 llywood actors of his generation. There are many wonderful supporting performances as well. The minor characters are a colourful assortment of the desperate, the vicious and the pathetic.

This is also a classic New York movie and it provides a terrific glimpse of the city in the late 50s. James Wong Howe’s cinematography is breath-taking, but then it usually is. One of the great masters of black-and-white cinematography 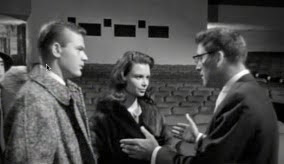 It might not follow the noir template strictly, but it ticks enough noir boxes to keep most noir fans happy - lots of moody night shots, lots of corruption, and a wonderful sense of characters rushing to their doom through their own actions, their own weaknesses and their own perversities.

And Fox Classics screened it in its correct aspect ratio which was a nice bonus.

A must-see movie not just for noir fans but for anyone who loves classic movies with a darker edge.
Posted by dfordoom at 1:31 PM