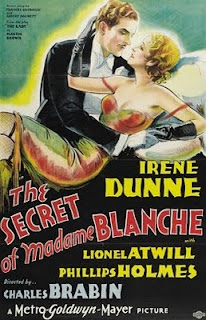 The Secret of Madame Blanche is a sentimental melodrama about thwarted mother love. As such it’s not going to be to everyone’s tastes but it’s a decent example of this type of film.

Irene Dunne is a American showgirl named Sally on tour in London in the 1890s. She meets a man who takes a shine to her and who is not prepared to take no for an answer. He eventually wins her over. He’s a gentleman, good-looking and charming, but unfortunately financially totally dependent on his father. He’s also quite incapable of performing any useful work, having been brought up to expect that he would never need to sully his hands with anything quite so distasteful.

Having decided that it’s true love they get married. His father is more than a little displeased. In fact he cuts him off without a penny. Disaster looms, and his efforts to persuade his father to accept the marriage are in vain. A series of catastrophes ensue, Sally ends up with a child to support on her own, b

ut worse is to come. Twenty years later an unlikely reunion will plummet Sally into even further misfortunes. I’m trying here to be as vague as possible so as not to spoil a lot with many twists and turns.

Irene Dunne is reasonably good, especially in the early part of the movie as the young showgirl. Lionel Atwill is truly the father-in-law from Hell, a performance of sustained wickedness, selfishness, stubbornness, cruelty, vindictiveness and all-round bloody-mindedness that is all the more chilling because Atwill avoids the temptation to overact.

This is very much a movie about the wicked aristocracy abusing its powers and behaving very badly indeed in just about every way. There are three generations of the St John family males represented, all of them appalling in their own ways.

There’s a degree of self-sacrifice on the part of the mother that may well have modern audiences shaking their heads in disbelief. It’s all very overwrought, and in the true style of melodrama there’s an excessive reliance on amazing coincidences and the inescapable nature of Fate.

There are some minor pre-code features, with some of Sally’s misfortunes stemming from the social disgrace of working in what is clearly a brothel although it’s equally clear that Sally herself is not a prostitute. And like so many pre-code movies it takes a rather jaundiced look at family life.

While I rather enjoy melodramas this one, to my way of thinking, doesn’t quite make the top grade. Still worth a look if it shows up on cable (it was screened in Australia by TCM so there’s every likelihood it will turn up on TCM elsewhere).
Posted by dfordoom at 7:56 PM