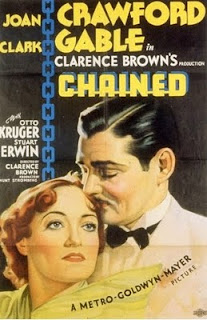 To describe Chained as lightweight would be an understatement of epic proportions. This movie is as frothy and featherweight as a romantic melodrama could possibly be.

Middle-aged married steamship tycoon Richard Field (Otto Kruger) has fallen in love with the beautiful and glamorous Diane Lovering (Joan Crawford). Unfortunately his wife proves unexpectedly recalcitrant about granting him a divorce. Diane tells him she doesn’t care, that she would be happy to live in sin with him, nothing matters as long as they can be together. But Richard, who is rather annoyingly noble, feels uncomfortable about this and spends her off on an ocean voyage to think about it.

An ocean voyage is perhaps not the wisest thing for a middle-aged man to suggest to his much younger and extremely attractive girlfriend. And sure enough, she falls prey to the dreaded shipboard romance syndrome. T

he object of her affections is Mike (Clark Gable). He owns a ranch in the Argentine and he sweeps her off her feet. Their romance continues when the ship reaches Buenos Aires.

Diane at this point has a sudden attack of nobility as well and decides she must return to New York to tell Richard face-to-face that she has fallen in love with another man. This turns out to be much more complicated than she anticipates. The romantic triangle is ultimately resolved in a rather unconvincing manner. 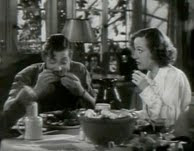 1934, but not released until after the Code started to bite. As such it’s a transitional picture, with a rather pre-code non-judgmental approach to marital indiscretions but at the same time taking care that the social rules are bent but not actually broken.

Chained represents MGM film-making at its most facile and frivolous. The paper-thin plot and cardboard cut-out characters could easily have sunk this movie but MGM gives it the full-floss high-glamour treatmen

t. The sets are gorgeous. Crawford’s dresses and hairstyles are gorgeous. Gable and Crawford exude charm, glamour and beauty. Crawford is at her most alluring. She radiates sex, and whenever the creaky ploy falters she simply turns up the sex appeal a little more.

With the reliable but fairly conventional Clarence Brown at the helm this movie is competently directed, with Brown content to let his two leads carry the picture with their very considerable star quality. With Gable and Crawford steaming up the screen whenever they’re together this turns out to be a sound approach and despite its lack of any depth whatsoever it’s charming harmless fun.
Posted by dfordoom at 11:31 PM