The Strange Love of Molly Louvain (1932) 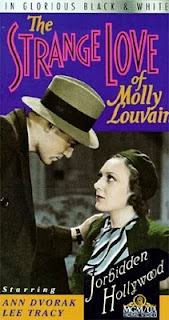 The Strange Love of Molly Louvain is more or less what you expect from a Warner Brothers pre-code film that focuses on both crime and newspaper reporters. It’s a fast-moving and fast-talking, cynical, hard-boiled combination of drama. comedy am romance.

With the very competent Michael Curtiz in the director’s chair, and with two perfect pre-code leads in the shape of Ann Dvorak and Lee Tracy, it sparkles and wise-cracks its way through its very brief 73-minute running time, scarcely pausing long enough to catch its breath.

Ann Dvorak is Molly Louvain, a young woman who thinks that life is finally going to give her an even break. Her mother had abandoned when she was a kid, but now she’s found a rich young man who has promised to marry her. Unfortunately when she turns up at his family’s house for the celebrations marking her engagement she find that the whole family has hurriedly decamped. Apparently they decided that the heir to the family name was not going to marry some foundling who works at a cigar counter at a hotel.

This is bad enough, but Molly is pregnant as well. She had two

other male admirers, a good-hearted but penniless bell-hop who worked at the same hotel and a smooth operator named Nicky Grant. She makes her choice, and throws in her lot with Nicky. But Nicky turns out to be more of a crook than she’d realised and their life together is mostly spent evading the cops. Meanwhile her daughter is being cared for by a foster mother.

Molly is working as a hostess at a dance-hall when her life takes a fateful turn. She runs into the bell-hop again. He’s now a medical student, still wet behind the ears and still in love w

ith her. She also meets Scotty Cornell, a motor-mouthed newspaper reporter. He has literary aspirations and he’s also hoping to snare a contract as a Hollywood screenwriter. Molly and the bell-hop got mixed up in Nicky’s latest bungled robbery and now the cops have decided that Molly is the leader of a major criminal gang, and they’re closing in on her. Scotty is closing in on her as well, but with different intentions. He offers to take her to Paris with him. He isn’t offering marriage, just a life of sin and fun.

cy are onscreen together. They’re both charmingly and cheerfully amoral, and while the supporting players are competent it’s Dvorak and Tracy who carry the movie and they do so effortlessly.

This is unmistakably a pre-code production, with no big deal being made about Molly’s having a child out of wedlock, and with a similarly casual attitude towards Scotty’s offer to take Molly to Paris with him as his mistress. And of course there’s the obligatory pre-code scene of the lead actress stripping down to sexy underwear.

Highly entertaining if somewhat lightweight and mildly naughty fun. Most definitely worth a look.
Posted by dfordoom at 4:32 PM