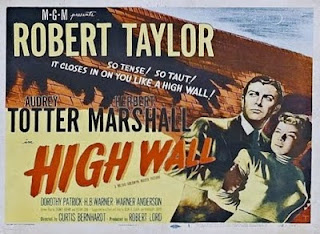 I have a real weakness for 1940s movies dealing with psychiatry - they’re almost guaranteed to be goofy outrageous fun. Combine psychiatry with some film noir themes and style and you have a definite winner in my book. And while no-one is going to claim that High Wall is one of the great noirs it certainly delivers entertainment.

The movie opens with a bang. A car is being chased by the cops. Steve Kenet (Robert Taylor) is driving with his wife beside him. She appears to be unconscious but as we’re soon to discover she is in fact already dead. Suddenly the car veers off the road and crashes. Meanwhile respectable businessman Willard Whitcombe (Herbert Marshall) has been told that his secretary left the office hurriedly after her husband suddenly returned after being overseas for two years. 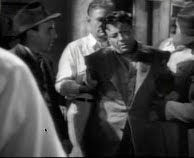 The dead woman in the car is the missing secretary and Whitcombe is called in to identify the body. The husband has survived the crash but seems confused and is mumbling that he has killed his wife. The rather zealous DA sees it as an open-and-shut case but a pesky doctor insists that Kenet be sent off for a psychiatric assessment. Kenet, a pilot, had brain surgery during the war and has recently suffered another head injury. Much to the DA’s disgust the psychiatrist who examines him decides he is unfit to stand trial.

That could change if he had another operation but he will not consent to this. Is he hoping to get off the murder charge on a 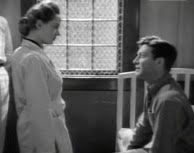 plea of insanity, or is he in fact trying to avoid a trial because he doesn’t want to take the chance of being acquitted? Is he determined to be punished for a crime of which he has no clear recollection? Psychiatrist Dr Ann Lorrison (Audrey Totter) is fascinated by the case. Initially convinced of Kenet’s guilt she gradually coms to suspect that perhaps he is not guilty after all. Kenet is also starting to winder of he really killed his wife.

What follows is classic 40s psychiatry movie stuff, with hypnosis and sodium pentathol (the truth drug so beloved of spy writers) being used as magical keys to unlock the parts of his memory that Kenet has blocked out. It’s not overly difficult to figure out what

actually happened on the fateful day in question - the suspense coms from Kenet’s struggle to uncover the truth and his race against time to do so before it’s too late and he finds himself committed to an insane asylum permanently.

Naturally Dr Lorrison gets involved with her patient to a degree that any reputable therapist would regard as highly unprofessional but it wouldn’t be a proper psychiatry movie if she didn’t (think of Ingrid Bergman in Spellbound. And it was almost a rule that the psychiatrist in question had to be young, attractive and female.

r, obviously realising that his days as a matinee idol were numbered, had just started to reinvent himself as a much darker sort of actor. It was an experiment that proved highly successful and Taylor went on to give some superb performances in noirish thrillers like The Bribe and Rogue Cop. His performance is one of the highlights of High Wall - he’s sympathetic but with lots of rough edges. Audrey Totter and Herbert Marshall are both very solid.

This was an MGM picture but it has a very definite film noir look and atmosphere.

Of course the plot can’t be taken seriously but if you disregard that and just enjoy the ride you’ll find this a highly entertaining little movie. Unfortunately this one doesn’t appear to be available on DVD but if it turns up on cable TV it’s well worth watching.
Posted by dfordoom at 2:28 AM