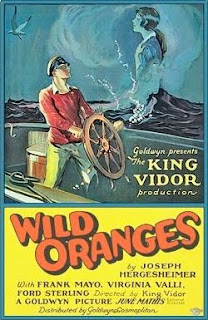 The movie opens with a kind of tragic prologue. A newly married young couple are riding in their buggy when their horse is spooked. The wife falls from the buggy and is killed. The distraught widower, John Woolfolk, vows to turn his back on love forever.

Woolfolk takes to the sea in his yacht, alone apart from one crewman and companion. Some years later he puts in at a remote inlet on the Georgia coast. An old man lives in an isolated house with his grand-daughter Millie, fearful of the outside world. A strange young man named Nicholas has attached himself to them. He’s both child-like and violent, and he is obsessed with Millie.

John Woolfolk finds himself drawn to Millie despite his fears of being hurt by love. Millie and her grand-father are completely cowed by Nicholas. A series of violent altercations between John Woolfolk’s crewman and Nicholas ensues. Woolfolk realises he will have to take the initiative and arrange an escape.

This movie has practically all the features that so many people find off-putting in silent movies - the histrionic acting,

the wildly melodramatic plot, the complete absence of any sense of realism. But in this movie these faults become virtues. This is a movie that makes no apologies for being a melodrama. It positively revels in its melodramatic nature. If you can accept that then you’ll find that the acting styles actually work.

Wild Oranges is more than anything else a film about two people trying desperately to escape from life, and coming to realise that they cannot continue to run way, and that they no longer want to do so. They learn to accept life, with all its risks and heart-breaks.

Vidor was already a well-established experienced director and he handles the action with complete assurance. The TCM print preserves the original tinting - a feature of many silent movies that I find particularly attractive and effective in evoking mood. Picture quality is excellent.

A highly enjoyable romantic melodrama, but if you dislike melodrama you may find it heavy going. I liked it a lot.
Posted by dfordoom at 10:10 PM