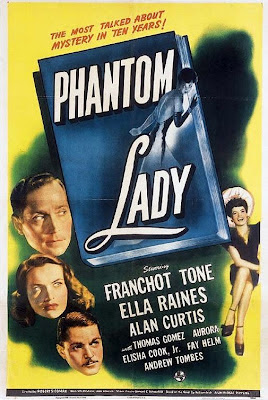 Phantom Lady is a movie that is quite special to me because it’s one of the movies that got me hooked on film noir. It still stands up extremely well.

Of course now I can see that this 1944 Universal film is not really film noir, it’s more of a Hitchcock-style wrong man movie. Stylistically however it’s very film noir, and good film noir.

A man (Scott Henderson, played by Alan Curtis) meets a woman in a bar. They’re both down in the dumps. He has two tickets to the theatre but as he explains he’s been stood up. She agrees to spend the evening with him on the condition that they don’t reveal their names. They’re just two unhappy people who will be companions for the evening.

When he arrives home later that evening the nightmare begins. His wife has been murdered. Their marriage was on the rocks and they’d quarreled about a divorce. The circumstantial evidence against him is strong, but luckily he has an alibi. Or he thought he did. Unfortunately no-one now remembers seeing him with the mystery woman. And of course he has no idea who she is or how to find her.

That unsatisfactory and unconvincing alibi helps to get him convicted of murder. One person still believes in him however - his secretary Carol (Ella Raines). She’s been in love with him for as long as she’s worked for him and she knows the man she loves could not be a murderer. Despite the odds she intends to prove that he is innocent and save him.

That damn-fool alibi has been worrying Detective-Inspector Burgess (Thomas Gomez). Why would a guilty man concoct such a stupid alibi and then stubbornly stick to it like that? The more he thinks about it the more it worries him. So Carol finds herself with an ally. She soon finds herself with another ally - Scott’s best buddy Jack Marlow (Franchot Tone). He’s not such a reliable ally. She has no reason to doubt him but the audience has very strong reasons to think he’s not playing with a full deck.

The usual formula for such movies is that the man accused of a crime he doesn’t commit has to escape from custody and prove his innocence. This movie doesn’t follow that formula. Scott spends virtually the entire movie behind bars. As a result it’s up to Carol to prove his innocence. That makes Carol the central character, and it means that the movie stands or falls on Ella Raines’ performance. Fortunately she’s more than equal to the task. She’s superb. Carol is a sweet kid from Kansas but she’s also a resourceful, intelligent and very determined young woman.

Franchot Tone made a lot of movies but rarely got good roles. This time he has to do some serious acting and he relishes the opportunity.

Alan Curtis has little to do but he’s solid and Thomas Gomez is good as Detective-Inspector Burgess, a man who has no personal feelings one way or the other about Scott Henderson but he does have a stubborn sense of duty and and it’s his duty to send guilty men to the chair, not innocent men.

Director Robert Siodmak and his cinematographer Elwood Bredell demonstrate a mastery of the visual iconography of film noir. The movie was based on a Cornell Woolrich novel and Woolrich’s dark and twisted novels always adapt superbly to film.

The Region 4 DVD seems to be the only one available apart from a Spanish release. It’s barebones but quite acceptable.

A terrific and very stylish noirish thriller, and highly recommended.
Posted by dfordoom at 10:58 PM