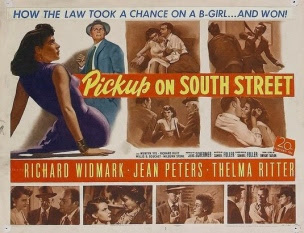 It opens with a visual tour-de-force, a lengthy dialogue-free sequence of a pickpocket robbing a woman on a New York subway. This is picking pockets as a kind of seduction. It has a disturbing twisted eroticism to it that sets the mood for the rest of the film.

Pickpocket Skip McCoy gets more than he bargained for. The woman’s purse contained a microfilm. The microfilm contains US military secrets. The woman, Candy (Jean Peters), is acting as a courier for her ex-boyfriend Joey (Richard Kiley). She thinks he’s involved in industrial espionage but in fact he’s a communist agent. Without the microfilm Joey will be in big trouble with his spymaster bosses. 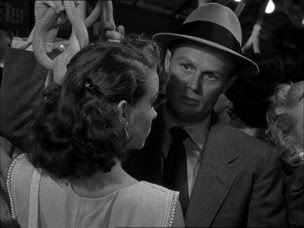 Joey and Candy now have to find the pickpocket to get the microfilm back while the police and the FBI have to find both the microfilm and the spymaster, and in order to do that they have to find the pickpocket. These parallel chases lead them all to professional stool pigeon Moe (Thelma Ritter in an Oscar-nominated performance). Skip knows Moe is a stoolie but he doesn’t hold it against her. As far as he is concerned it’s no more immoral than being a pickpocket - it’s just a living. He’s actually quite fond of her. 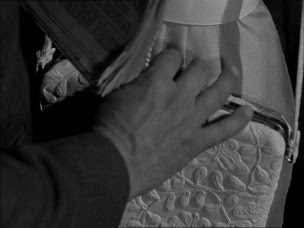 The usual template for film noir is that a basically decent guy finds himself drawn into the film noir universe of corruption and damnation, and then has to struggle desperately to save himself. His downfall generally comes about because he has a weakness, or because there’s a small seed of corruption within him.

This movie offers a twist. We have a basically corrupt guy who finds himself drawn, reluctantly, into the daylight world. This happens because here’s a small seed of decency within him. He still has to struggle desperately to save himself, but he has a better chance of redemption. Of course the redemption may come at the price of his death. 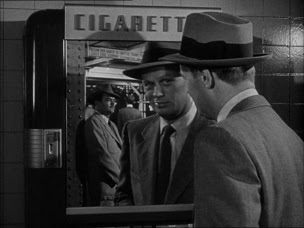 The means by which this happens is the same as in the classic noir template - a woman. She also follows a variation on the classic femme fatale pattern. She tempts him with things he’s never experienced before - loyalty and love. She wants to save him. Like most women who want to save men she’s picked a loser but maybe this time it will work out. There’s not much decency within him but there is a tiny spark buried deep down inside.

She’s also looking for redemption. She’s picked losers before and it’s worked out disastrously and she’s been drawn into that film noir universe herself. In fact her story follows the classic noir pattern more closely than Skip’s. She really is basically decent but she’s been involved with a male version of the femme fatale, a homme fatale if you will, in the person of Joey. He has corrupted her and she is fighting against it. 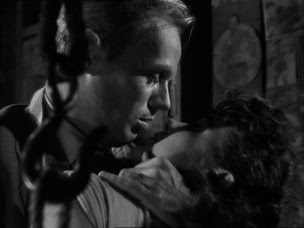 Richard Widmark is a bit of a noir icon but I find his early performances irritating. They’re all mannerisms and twitchiness and the characterisation is too obvious. By 1953 he was a much more experienced actor and he’s toned things down. He still conveys that sense of a spring that’s been wound too tightly but now he’s in control of the performance. It’s a difficult role because his change of heart has to be convincing, not just a plot contrivance. It works because Fuller’s script provides a believable motivation. Actually two believable motivations, one involving Moe and one involving Candy. Jean Peters is also impressive.

The most amusing thing about this movie is reading some of the online reviews and watching the way the reviewers twist themselves into knots trying to turn it into something they can approve of - a film that is subversive and transgressive and anti-American. Some even manage to convince themselves that the movie is really depicting the police and the FBI and the US government as the bad guys. They’re utterly unconcerned by the fact that there is nothing in the film to support such an interpretation. They believe the line that has been pushed by the film school types that a movie can only be worthwhile if it’s subversive and transgressive and attacks the American Dream. 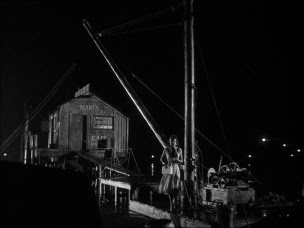 In fact this movie is completely apolitical in any conventional sense. The microfilm is a McGuffin. Communism is used as a metaphor for corruption - the communist agents are evil because they use lies, manipulation and violence to control people. They differ from the straightforward criminals only in being more ruthless and more dishonest. Skip has always been a thief and Moe has always been a stool pigeon but at least they’ve never claimed to be anything else. There are degrees of corruption. Skip and Candy can only save themselves from the noir nightmare world by learning to trust and to be honest with each other, by leaving the world of lies and manipulation.

Skip, Candy and Moe are all outsiders but Fuller avoids glamourising their outsider status. While they’re all complex and to some extent sympathetic characters the criminal underworld is petty and sordid. To survive they will need to escape from that world. All are given a chance of redemption but whether they will achieve it is by no means certain.

A fascinating and stylish, and emotionally multi-layered, movie by one of the most individualistic and eccentric of all American film-makers. Highly recommended.
Posted by dfordoom at 10:20 PM