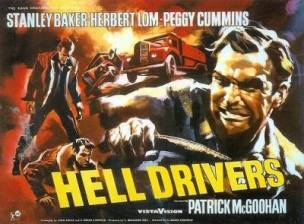 Hell Drivers, released by Rank in 1957, is the type of gritty thriller the British film industry used to do so well back in the 50s. On the surface it’s an exciting macho action movie but great writing and superb performances make it so much more.

This movie could without stretching definitions too far be described as an example of British film noir. There’s a hero haunted by mistakes in his past that he may not be able to escape, there’s corruption, there’s a femme fatale, there’s a sense of impending tragedy and a tense brooding fatalistic atmosphere. It’s not a crime movie as such but it does feature an ex-con and there are illegal goings-on.

Tom Yately (Stanley Baker) applies for a job as a short-haul lorry driver. He has a few problems with the interview. He can’t produce references because as he explains he’s been abroad. As we find out later he’s actually been in prison. Nevertheless he is given a test run and he gets the job. 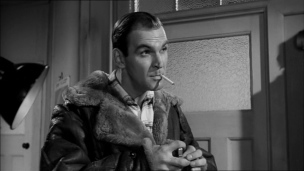 It’s dangerous and demanding work. The drivers must make at least twelve runs a day, their trucks loaded with ballast, over roads that are both rough and narrow. And it is impossible to meet that quota without taking risks. Big risks. The drivers are a rough lot. They refer to themselves as hell drivers and they’re not kidding. But Tom has few employment options and the money is good.

The number one driver and road foreman for this firm is Red (Patrick McGoohan). He’s even rougher than the other drivers, a violent and reckless individual who is determined to stay number one and will use any methods necessary to do so. Tom and Red take an instant dislike to one another. In fact the only driver Tom likes is an Italian known as Gino (Herbert Lom). 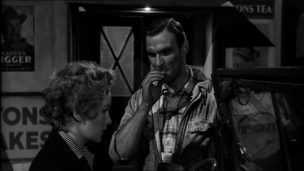 Gino is hopelessly in love with the firm’s secretary, Lucy (Peggy Cummins, best-known for her extraordinary performance in Gun Crazy). Lucy likes Gino but he’s not in love with him. She doesn’t exactly lead him on but she just can’t find a way to explain things to him. As soon as Tom and Lucy set eyes on each other the sexual sparks start to fly. This is awkward for Tom. Despite his criminal record and his somewhat surly nature he’s a decent guy, the sort of man who thinks there’s nothing lower than stealing another man’s girlfriend. And he likes Gino a lot.

There’s a kind of competition going among the drivers to complete the most runs in a day, with the prize being a very expensive gold cigarette case. It’s more a matter of prestige than the actual prize though. So far no-one has been able to beat Red’s record. Tom is determined to do so. The tensions between Red and Tom continue to mount for a variety of reasons and their rivalry becomes more and more intense and more and more dangerous. It finally becomes absolutely poisonous and potentially deadly. 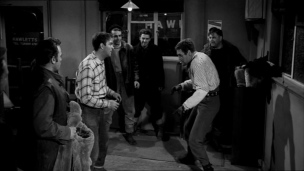 It seems like everybody who was anybody in the British film industry is in this movie. Apart from the stars already mentioned the supporting cast includes William Hartnell (best-known as the first Doctor Who), Gordon Jackson, David McCallum (soon to achieve TV stardom in the Man from UNCLE), Sid James (of Carry On fame), Jill Ireland and an up-and-coming Scottish actor by the name of Sean Connery.

Patrick McGoohan chews the scenery with great abandon and his approach proves to be the ideal counterpoint to Stanley Baker’s slow-burning tightly wound performance. Herbert Lom is entertaining as always. Peggy Cummins is dangerously sexy, a quality she was exceptionally good at conveying. Without exception the acting is superb. 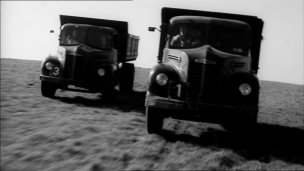 The action sequences are riveting and realistic. The realism was achieved at some risk. The actors did their own driving and the epic fight scene between Red and Tom was one for real. Both actors had been amateur boxers and both ended up with a collection of bruises and loose teeth. This gives the action scenes a very immediate quality and combined with Cy Endfield’s skillful direction they’re the most impressive element in the film. The driving scenes are truly hair-raising.

The one false note is the subplot towards the end involving the wicked capitalist boss defrauding the noble down-trodden working-class. It gives the impression of being tacked on in an ill-advised attempt to add a political message, always a bad idea. It’s clumsy and quite unnecessary since the rest of the movie has already provided ample motivation for the characters’ actions.

Aside from one minor quibble this is a superb example of 1950s British film-making at its best.

The Region 4 DVD from Madman is a good widescreen print and includes a contemporary making-of documentary and an interview with Stanley Baker filmed in the late 50s. Highly recommended.
Posted by dfordoom at 6:43 PM