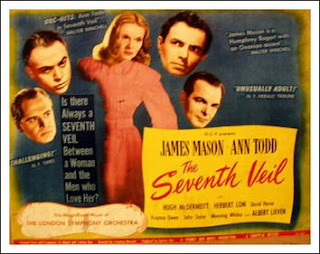 The Seventh Veil was one of the most successful British movies of all time. In fact, measured by ticket sales, it’s the tenth biggest box-office hit in British history, well ahead of movies like Jaws, Jurassic Park or The Lord of the Rings. This 1945 production is also one of the most respected of all British movies.
I’m now going to enrage fans of British movies (and I am myself a very big fan of British films of the 40s and 50s) by stating that it’s a very bad movie.
As the movie opens we see a woman we will later earn is Francesca Cunningham (Ann Todd) trying to kill herself by jumping off a bridge. After being taken to hospital she refuses to speak and no-one knows why she did it. Psychiatrist Dr Larsen (Herbert Lom) believes he can find the answer. He explains that the human mind is like Salome’s seven veils. He might remove two or three with friends, and five or even six with a lover, but we never remove the seventh veil. But with hypnosis he can persuade her to remove that seventh veil. 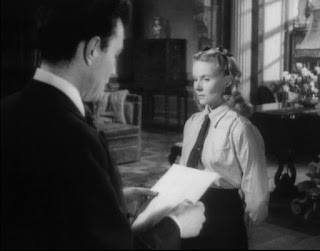 He regresses her to her childhood, which we then see in a flashback. At the age of 14 a caning at school causes her to miss out on a piano scholarship, her hands being too swollen to allow her to play. Her dreams of a career as a concert pianist seem to be dashed. Shortly thereafter she is sent to live with her Uncle Nicholas (James Mason) who is now her legal guardian. The shy Francesca and the moody and taciturn Nicholas do not get on. Then Nicholas discovers her passion for music, a passion he shares.
He begin the process of moulding her into a great concert pianist. He turns out to be an inspired teacher. Several years pass and her talent is becoming more and more obvious. Nicholas sends her to the Royal College of Music but tensions remain between Francesca and Nicholas. She falls in love with a fellow student and announces she is going to marry him but Nicholas forbids the marriage. Given that she is only 17 his decision is probably not unreasonable but Francesca is bitterly resentful. 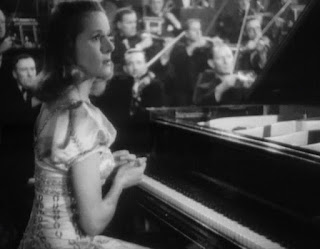 More years pass and she has now achieved her dream. She is an internationally renowned performer but she is increasingly aggrieved over Nicholas’s rigid control of her life and career. She has also over the years developed an obsession over her hands, natural enough for a musician but she takes it to extremes.
She now decides to run off to Italy with an artist. This leads to a confrontation with Nicholas, and she leaves. Again his opposition is not entirely unreasonable - in the 1940s shacking up with an artist would probably have destroyed her career. There is a car accident and she is now convinced that her hands are irreparably damaged and she can never play again. We are now back to the present day and we have the explanation for her suicide attempt, but Dr Larsen realises she has still not dropped that seventh veil. There is still no explanation of her conviction that her hands are ruined since there is in fact absolutely nothing wrong with them. So what lies beneath that seventh veil? 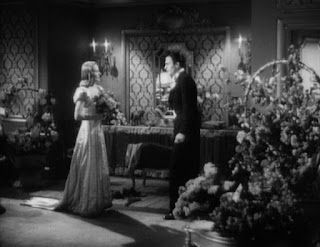 There are quite a few problems with this movie, most notably with the casting.
Francesca goes from being 14 to being presumably just short of 21 at the end (since Nicholas is still her legal guardian). But Ann Todd was 36 at the time! In fact she was the same age as James Mason! And to be honest she looks 36. It makes it difficult to buy the idea that Francesca sees Nicholas as an incredibly intimidating and yet strangely god-like character. She seems much too mature to fall under the spell of a Svengali. A great actress could have overcome this problem and made us believe in the character anyway, but sadly Ann Todd was not a great actress. It’s not just that she’s too old. We need to not only like Francesca, we need to be fascinated by her. We need to care what lies beneath that seventh veil. Frankly, her performance is dull. Francesca also comes across as being rather selfish. For all his faults Nicholas has devoted almost a decade of his life to helping her realise her dreams. He has his own motivations of course but it’s not as if he pushed her into her career. It’s what she always wanted.
The second problem is James Mason. He’s just too good. He completely dominates the movie. He makes Nicholas a complex, enigmatic but oddly sympathetic character, a man who is terribly vulnerable. He’s a control freak but Mason makes him a lot more interesting than Francesca. Of course, while this is a fault if the movie is supposed to be about Francesca, with Francesca being so uninteresting Mason’s performance at least gives us someone to focus on. 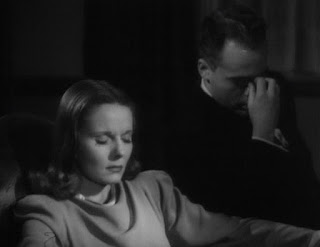 The third problem is the script, which actually won an Academy Award. In the 40s film-makers were obsessed with psychiatry and hypnosis. The results are invariably ludicrous, but usually highly entertaining. I personally adore 1940 psychiatry movies, but probably not for the reasons the film-makers hoped! While I generally dislike the idea of judging movies as being so bad they’re good I make an exception with 40s psychiatry movies. They’re always bad and the worse they are the more fun they are. So whether the script is a disaster or a delight depends on your point of view. It’s certainly very silly.
Herbert Lom as Dr Larsen has the unenviable job of trying to make the psychobabble sound convincing, but being Herbert Lom he ends up making the psychiatrist seem slightly sinister. Certainly not what the film-makers would have intended but it does add to the fun. The script adheres to the then amazingly popular theory that if you could just find out why someone was crazy they would then instantaneously and miraculously be cured. A bit like thinking that if you could find out how someone broke their leg the leg would instantly heal itself!
So while it’s a fairly bad movie it’s thoroughly enjoyable, and James Mason and Herbert Lom are always compulsively watchable. The Seventh Veil is recommended as long as you don’t try to take it too seriously. The Odeon Best of British all-regions DVD is not a stellar transfer but it’s perfectly acceptable.
Posted by dfordoom at 3:49 PM