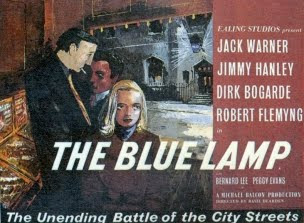 The Blue Lamp, made at Ealing Studios in 1950, is in some ways a British version of The Naked City - an early example of the police procedural shot in a pseudo-documentary style.

It’s a style that would later become very popular in British crime television series, and in fact one of the lead characters went on to become the central character of one of the most successful and long-running of all British TV cop shows, Dixon of Dock Green.

While it’s not film noir it does have some affinities to noir, most notably in the way it portrays the sense of postwar disillusionment and anxiety, elements often seen as playing a major role in American film noir. There’s also a background of a society beginning the long slow process of unravelling, a feature of this movie that is usually overlooked.

In this case the principal anxiety is juvenile delinquency. At this period if you were making a British movie dealing with such a subject you had two casting choices - Richard Attenborough or Dirk Bogarde. Two of the greatest of all British actors, and arguably no actors have ever conveyed the sense of menace and of youth dangerously out of control, combined with a sense of vulnerability and hopelessness, as these two stars. In The Blue Lamp the main juvenile delinquent is Dirk Bogarde.

This was in fact the movie that established Bogarde as a major star. It was one of three great crime thrillers he made that year, the other two being So Long at the Fair and The Woman in Question.

The movie is intended to be focused primarily on the police but Bogarde’s twitchy and disturbing presence completely dominates the movie.

The police are facing a major challenge - a new breed of young criminal who refuses to play by the established rules. This is one of the major themes of the movie - the divide between the old-school professional criminals who detest violence and this new breed who are vicious violent hoodlums, made even more dangerous by their youthful incompetence. Two such hoodlums are Tom Riley (Dirk Bogarde) and Spud (Patric Doonan). They have teamed up with a young runaway, Diana Lewis (Peggy Evans). The three of them plan to rob a theatre but of course it all goes horribly wrong and there is a shooting. If the victim dies this will become a murder case.

This bungled robbery will have momentous consequences for both PC Dixon and PC Mitchell, in very different ways.

Detective-Inspector Cherry (Bernard Lee) is in charge of the investigation and leads are hard to come by until one of the three young criminals makes a fatal error.

This is a film that couldn’t be made today. Modern audiences would refuse to accept the idea of police officers as decent dedicated men and women. It is a very idealised view of the police, but perhaps we have become so cynical that we cannot even comprehend such concepts. Modern audiences would also be mystified by the sharp divide between the old and breeds of criminal, a gap so wide that the old-school criminals are willing to help the police catch the young hoodlums.

The biggest problem this movie has is the acting. Dirk Bogarde is of course superb but everyone else is too stiff, too formal, too lifeless. The script doesn’t help, relying too much on stereotypical stock characters. The police officers in particular manage to be both dull and mildly irritating.

The movie does have compensating strengths though. Basil Dearden was a fine director and his approach is lively and stylish. There’s some splendid location photography and some excellent set-pieces.

Stilted at times and a little too idealistic in its depiction of police work, it’s still worth a look.
Posted by dfordoom at 1:21 AM