Gunga Din is one of those movies that demonstrates that a troubled production history doesn’t necessarily lead to a bad film. It can result in a very good film.

To say that this 1939 production was based on Rudyard Kipling’s poem of the same name would be misleading. It would be more accurate to say it was inspired by the poem and by his collection of short stories Soldiers Three but in fact the screenplay by Ben Hecht and Charles Macarthur is pretty much an entirely original story. Many writers worked on this project but the plot of the final film was largely the work of Hecht and Macarthur.

Several different directors were at various times slated to direct the film, including Howard Hawks. Eventually RKO settled on George Stevens because up to that time he’d had a reputation for bringing movies in on time and on budget. Ironically Stevens went way over budget on Gunga Din! Many actors were also at various times considered, including Robert Donat and Ronald Colman, before the final lineup of Cary Grant, Victor McLaglen and Douglas Fairbanks Jr was chosen for the three leads, with Sam Jaffe as Gunga Din and Joan Fontaine as Fairbanks’ love interest.

This was in fact a very very big production for RKO. There was a good deal of location shooting, mostly at Lone Pine in California (a perennially popular movie location), and some impressive sets. And some very large-scale action scenes. Sergeants Cutter, MacChesney and Ballantine (Grant, McLaglen and Fairbanks) are three firm friends serving in the British Army in India. They’re good if somewhat rowdy soldiers who see themselves as being a bit like the Three Musketeers. Until a terrible disaster intervenes - Sergeant Ballantine announces he’s going to get married and leave the army! His bride-to-be Emmy (Joan Fontaine) thinks the army is much too dangerous. Of course now it’s up to Cutter and MacChesney to save their pal from this awful fate.

Cutter has other plans on his mind as well, like looking for a fabulous treasure rumoured to be found in an abandoned temple. He has two companions in the quest for the treasure. One is the regimental water-carrier, Gunga Din, who has dreams of being a real soldier. The other is one of the regiment’s elephants, Annie (the particular pet of Sergeant MacChesney). 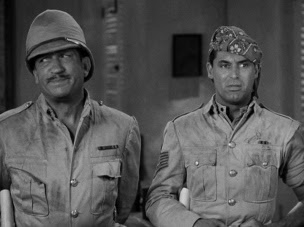 What Cutter doesn’t know that the temple is in fact the headquarters of a revived Thuggee cult. The murderous Thugs were thought to have been eliminated but this is far from being the case. The Thugs have moved beyond their usual practices of ritual murder and are now planning large-scale revenge on the British who had suppressed their cult. This will put the whole regiment in danger. The three friends all become involved in a desperate attempt to foil the Thugs’ plans and Gunga Din will find a role to play as well.

It’s a wonderful rousing adventure tale. It starts in a light-hearted vein but gradually becomes more serious and ends with a spectacular battle scene. The very strong cast is a major asset. While Joan Fontaine has little to do the film affords the other players plenty of opportunities and they make the most of them. Cary Grant’s performance is heavy on the comedy but that suits the tone of the movie well enough. The standout performance though comes from Douglas Fairbanks Jr, an actor I find myself liking more and more.

George Stevens may have had set an outrageous amount of RKO’s money on this picture but the results are worth it. The movie cost so much that it made a loss on its initial release despite doing good business at the box-office but it was regularly re-released and ended up being a very profitable property. The Region 1 DVD looks great and includes some worthwhile extras.

One of the classic Hollywood adventure movies.
Posted by dfordoom at 1:07 AM