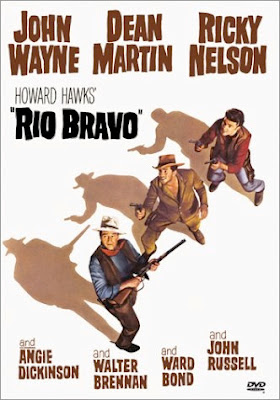 In Rio Bravo in 1959 Howard Hawks returned to the themes that informed all his great action adventure movies. Once more we have we have a group of men facing danger and death, and once more they are professionals and as such they willingly accept the risks involved.

Sheriff John T. Chance (John Wayne) has a prisoner in his gaol in a small border town in Texas. Joe Burdette is accused of murder. A US Marshal is on the way to collect the prisoner but will not arrive for six days. The problem for the sheriff is that Joe Burdette’s brother Nathan is the most powerful man in the county. Nathan is a rancher but in truth he’s more of a gangster. For Nathan Burdette murder is a minor matter compared to saving his brother from the noose. He has dozens of well-armed men and he is determined that his brother will not stay in gaol. Sheriff Chance has only his two deputies, a cripple (Stumpy, played by Walter Brennan) and a drunk (Dude, played by Dean Martin). 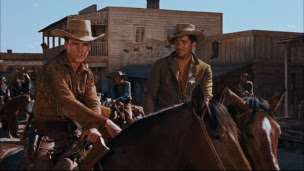 The plot is essentially a siege. When Nathan pays a travelling Mexican band to play the same song that the Mexican army played during the Battle of The Alamo to try to convince them of their doom it makes perfect sense. Chance and his men are every bit as besieged as the defenders of The Alamo. This applies particularly to Dude. He’s an alcoholic and when the events of the movie start to unfold he’s been sober for precisely one day. He doesn’t know if he will be able to get the job done, and nor does Chance. There’s a memorable scene where the two of them have to go into a saloon full of bad guys to arrest a killer. Chance lets Dude take the lead. He wants to give Dude the chance to prove that he’s up to the job but he’s ever watchful in case this proves not to be the case. The scene is beautifully played by both actors.

Wayne gives one of his strongest performances, nicely leavened with humour. When Hawksian heroes face danger and death they don’t get all maudlin about it. Dean Martin is the big surprise. He apparently was very keen to land the role. He clearly thought he could do it justice, and he was right. Ricky Nelson is also surprisingly good as the young gunslinger Colorado Ryan. He wasn’t the world’s greatest actor but he’s more than adequate and he plays the role with a certain sly humour which complements Wayne’s performance nicely. 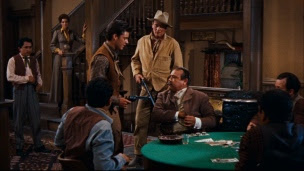 And then there’s the girl. Feathers (Angie Dickinson) is a classic Hawks woman. She’s feisty, strong, intelligent, resourceful and level-headed. In a tight corner she’s not a burden to the hero; she’s an asset. At first the love story between Chance and Feathers might seem a bit unlikely but really it makes perfect sense. She’s been married to one loser and she’s not going to make that mistake again. Next time she’ll pick a man who is worthy of her. She’s an alpha female and she’s going to go for the alpha male. While Dude and Colorado are both nice guys and they’re both cute John T. Chance is clearly the alpha male here. Angie Dickinson makes a slendid Hawksian woman.

This is an extraordinarily claustrophobic western. There’s hardly a scene in the movie where you can see the horizon. While other Hollywood westerns of the 50s were taking advantage of the widescreen formats to show the wide open spaces of the frontier Hawks takes the opposite tack. He closes everything in. His characters are trapped in the town, surrounded by Nathan Burdette’s gunmen. They’re in a universe of their own, completely cut off from the outside world, just like the airmen in Hawks’ much earlier Only Angels Have Wings. It’s a very effective technique and it really ratchets up the tension. Hawks was not tying to do anything radical in this film. He was not trying to re-invent the western. This is a much more conventional movie than the westerns John Ford was making at the same time. What I suspect Hawks was trying to do was to show that the traditional western themes were timeless and that if done with sufficient skill they would still work. What it does have in common with the contemporary westerns of Ford, and of people like Anthony Mann and Budd Boetticher, is that it’s a very grown-up western.

While Hawks is dealing with well-worn themes he never descends to mere cliché. This is illustrated rather nicely by the character of Colorado. when we first meet him we expect he will fall into one of two cliché roles. We expect that most probably he will be the young hot-headed gunslinger - cocky, over-confident and dangerous - who will cause trouble for the sheriff. But it doesn’t happen. There is tension at first between Colorado and Chance, but that’s just the older man testing out the youngster. Chance soon decides that this kid is alright. The second alternative would have been for him to the typical rookie who needs the older man to teach him the ropes. But that doesn’t happen either. Colorado is young but he’s a cool-headed professional. We also suspect that when he is given his deputy’s badge he will clash with Dude, being a threat to the older man. In fact he and Dude get along very well. 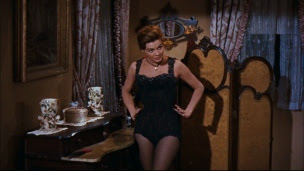 While Hawks made some memorable westerns I don’t think he was a western director in the sense that John Ford was. John Ford movies like The Searchers or The Man Who Shot Liberty Valance could only have been westerns. There’s an obsession with the psychology of the frontier and the mythology of the west. Rio Bravo could just as easily have been a war movie, or a movie set in a big city with the heroes as cops. For Hawks the western was a means to an end, a way of telling the stories he liked to tell. For Ford the western was an end in itself.

With a fine script by Jules Furthman and Leigh Brackett, a strong cast and with Hawks’ non-nonsense directing style Rio Bravo is magnificent entertainment.
Posted by dfordoom at 9:16 PM