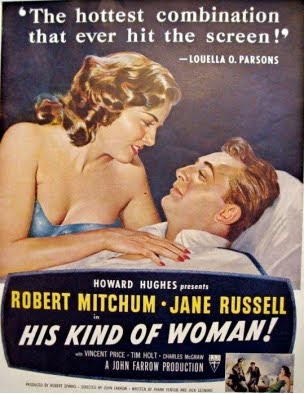 His Kind of Woman is one of those films that can best be described as a glorious mess. It is in fact two different films spliced uneasily together, films from entirely different and incompatible genres, but both films are terrific and compulsively watchable.

Why is it such a mess? The answer to that one is easy - Howard Hughes. John Farrow directed the movie and came up with an excellent film noir. Hughes meddled, ordered Richard Fleischer to reshoot many scenes and beefed up Vincent Price’s role to the point where it becomes a film within a film. So you have a fine film noir but mixed in with it you have a delirious Hollywood comedy spoof. But it’s a genuinely funny and delightful comedy spoof and although it doesn’t fit with the rest of the movie it’s so much fun that in a perverse way I’m almost grateful to Hughes. Without his meddling Price would never have had the chance to play one of his best ever comedy roles.

Robert Michum is down-on-his-luck professional gambler Dan Milner. To pay off his debts he accepts a job. All he has to do is fly to Mexico and hang around for a while and then sail off on a yacht, and he will get to collect $50,000. Yes, it does sound too good to be true, and Milner is no fool but he’s a Robert Mitchum film noir hero and a mixture of curiosity and fatalism (plus the rather pressing need for money) decides him to accept the offer.

In fact it’s part of a scheme to get deported gangster Nick Ferraro (Raymond Burr) back into the United States. Ferraro will have plastic surgery to make him resemble Milner and then Milner will have an unfortunate accident. Milner realises even at the start that there’s a good chance the men paying him fifty grand don’t intend for him to live long enough to spend it but he figures he might be able to double-cross them and get away with it. And if not, well those are the breaks. And he is a gambler.

He shares a plane down to Mexico with singer Lenore Brent (Jane Russell). She claims to be a fabulously wealthy heiress. Milner has his doubts. He suspects that whatever she’s up to it’s probably not strictly legal but he likes her and she’s a looker and she’s fun. She’s his kind of woman and he can overlook one or two minor character flaws. It’s soon clear that he’s her kind of man as well. Unfortunately she has a boyfriend, movie star Mark Cardigan (Vincent Price). Mark has everything a gal could want - he’s rich and famous and he’s a nice guy and he’s generous. Unfortunately he also has a wife. Dan Milner and Mark Cardigan hit it off pretty well. Milner is hardboiled but with a soft centre and he’s an easy-going guy. Mark Cardigan and Lenore Brent are both phonies but he likes them.

Milner starts to figure out what the bad guys have planned for him. Luckily he finds an unexpected ally in Mark Cardigan. Mark is a keen, indeed obsessive, hunter. His hunting and marksmanship skills will prove useful. Mark knows he’s a phony but now maybe he’ll finally get the chance to be a real hero, just like the hero of a Mark Cardigan movie.

Once Milner is in Mexico the movie starts to fragment into disconnected and often irrelevant subplots, with the Mark Cardigan subplot gradually developing to the point where it’s pretty much an entirely separate movie. The constant intercutting between the main plot and this subplot becomes distracting but Mitchum and Burr are so good in the main film noir plot and Price is so good in his subplot that you can’t stop watching.

Jane Russell provides the only real link between these subplots and it must have been difficult for her switching between the femme fatale role in her scenes with Mitchum and the scenes with Price that become more and more like screwball comedy. She keeps her footing though and her sure-footedness is all that holds the movie together. Lenore Brent is the kind of lighthearted “bad girl who’s really not so bad after all” role at which Russell excelled.

Mitchum gives one of his trademark performances as well. Milner is no Boy Scout but he’s forced into acting the hero and he accepts his destiny with typical Mitchum fatalism. Burr is wonderfully vicious and sadistic as Ferraro.

The main film noir plotline is nicely developed and Farrow and his cinematographer Harry J. Wild get the film noir atmosphere right. There are an extraordinary number of low-angle shots. I’ve never seen so many ceilings in a Hollywood movie of this era, and all the ceilings seem to be pressing down on the characters as if the roof were about to literally fall in on them. It’s an odd but interesting touch. The suspense is well-maintained despite the constant intercutting between action/suspense scenes and action/comedy scenes and it’s a tribute to Farrow’s skills that this remains so despite Hughes’ meddling.

The scene in which Mark Cardigan sets off in pursuit of the bad guys in a small boat full of Mexican policemen and takes up a heroic position in the prow quoting inspiring lines from Shakespeare as the boat slowly sinks serves as a perfect metaphor for the whole movie. It’s a disaster but it’s a heroic disaster that is enormously entertaining to watch. With all its faults it’s definitely worth seeing.

It was released in Region 1 by Warner Home Video but my copy is the British all-region DVD from Odeon, with no extras but a very satisfactory transfer.
Posted by dfordoom at 6:57 PM