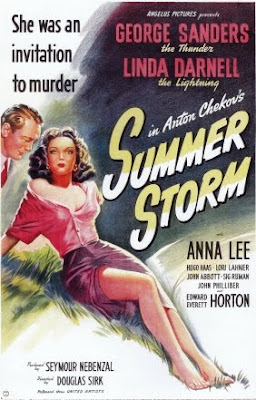 Summer Storm is one of Douglas Sirk’s earliest Hollywood films although he was already an experienced director in his native Germany when he arrived in the US. It’s a rather odd and uneasy adaptation of an 1884 Anton Chekhov 1884 novella, The Shooting Party . Sirk and Rowland Leigh shared the writing credit.

The setting is switched to 1912, allowing the movie to start in the post-Revolutionary Soviet Union and for the main story to be told in flashback. The only possible reason I can think of for this is that Hollywood in 1944 was besotted by America’s wartime ally and that it was a contemptible effort to show the brutal and vicious Soviet dictatorship in a favourable light. George Sanders is Judge Fedor Mikhailovich Petroff, a man who has lived the decadent lifestyle of the Tsarist aristocracy and is suddenly seized by the desire for marriage and respectability. Nadena Kalenin (Anna Lee) is a suitable match and Petroff believes he is in love with her. He believes it until he meets a beautiful peasant girl, Olga Kuzminichna (Linda Darnell). It is lust at first sight. Nadena Kalenin breaks off their engagement when she discovers his dalliance with this peasant bombshell.

Petroff’s friend Count Volsky (affectionately known as “Piggy” and played by Edward Everett Horton) has no intention of reforming. He also falls under Olga Kuzminichna’s spell but her father has married her off to his steward Urbenin. Urbenin is a peasant, and Olga Kuzminichna has much higher ambitions, but at least Urbenin is a relatively prosperous peasant and life with him promises to be an improvement on life with her drunken father. She has not however given up her ambitions. She continues her affair with Petroff whilst also (unbeknownst to Petroff) encouraging the attentions of Count Volsky. Of course this ménage à quatre will inevitably end in disaster, culminating in the tragic shooting party from which Chekhov’s novella took its title.

The screenplay provides the material for the sort of melodrama at which Sirk excelled but unfortunately the movie veers uneasily between melodrama and comedy. Sirk demonstrated two years later with the excellent A Scandal in Paris that he could (rather surprisingly) handle a light-hearted romp very adeptly. The problem is that combining melodrama and comedy in the same movie is a difficult if not impossible trick to pull off. In this movie the two genres clash disastrously. Melodrama has to take itself fairly seriously. You can do melodrama with irony, but not as comedy. 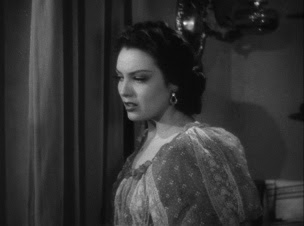 Most of the blame for this can be assigned to Edward Everett Horton. He was a fine comic actor but his performance here is hopelessly out of place. Unfortunately the movie is saddled with further unnecessary comic relief in the form of Olga Kuzminichna’s drunkard father.

George Sanders would have seemed a good choice for the role of Petroff but the normally sure-footed actor never seems to get a handle on the role. Partly this is because the part is underwritten and the character is colourless and dull (which is almost unheard of for a George Sanders performance). Petroff seems unsure if he wants to be a decadent aristocrat or a respectable and dedicated civil servant and family man. This potentially interest conflict is never developed and the characterisation comes across as confused rather than complex. The one bright spot is Linda Darnell, an underrated actress who gave a superb performance the following year in Otto Preminger’s Fallen Angel. She’s totally unconvincing as a Russian peasant but she’s totally convincing as a scheming femme fatale who oozes sex from every pore.

While Darnell and Sanders seem to understand that the movie needs to be played as melodrama Edward Everett Horton is convinced he’s doing a screwball comedy. The combination of this acting dissonance with Sirk’s uncertain direction and Sanders’ hesitant performance fatally undermines the movie. This is Sirk’s worst American movie, worth seeing only for Darnell’s energy, enthusiastic wickedness and hyper-sexuality.

The Odeon all-region PAL DVD gives us a handsome print but without any extras.
Posted by dfordoom at 4:16 PM