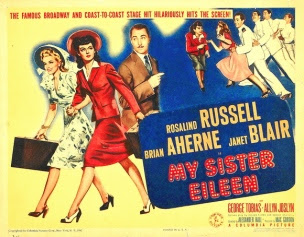 My Sister Eileen is a 1942 Columbia screwball comedy, and arguably it’s one of the best of its breed.

Ruth Sherwood (Rosalind Russell) and her sister Eileen (Janet Blair) live in Columbus Ohio. Ruth is trying to make it as a journalist and Eileen as an actress but even in the comparatively small pond of Columbus Ohio they’re still very small fish. Ruth decides that if you’re going to be a very small fish you might as well be a small fish in a big pond. In fact the biggest pond of all - New York. So, despite the forebodings of their father, they head for the Big Apple. 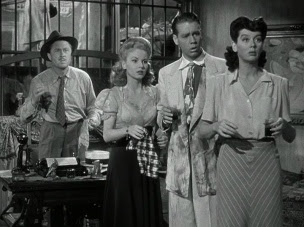 They end up living in a dingy basement rathole of an apartment in Greenwich Village with a crazy artist as a landlord. An added attraction is that a new subway is being constructed right underneath the building and the entire building shakes every time the engineers decide to do some blasting, which happens every few minutes But the good news is that the blasting only goes on for eighteen hours a day.

Their apartment seems to be a magnet for every crazy in New York. Most days Grand Central Station is slightly less crowded than the girls’ living room. The problem is that Eileen is a man magnet. She’s the bubbly sexy blonde while Ruth is the bookish type who’s never been a success with men. 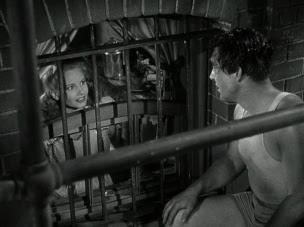 Their careers don’t exactly take off. Men are interested in Eileen but it’s not her career they’re interested in. Ruth does eventually get to meet the eccentric editor of the prestigious glossy magazine The Manhatter, Bob Baker (Brian Aherne). He thinks she has potential as a writer but her stories don’t have enough going on. She explains that it’s difficult to write when you’re surrounded by compete chaos and insanity. Then Bob has a brainwave. Why doesn’t Ruth trying writing about the craziness that surrounds her?

It’s an inspired idea and Ruth writes a story called My Sister Eileen, because Eileen is the centre of all the madness. Bob loves the story but of course there are still plenty of obstacles to overcome before Ruth can find success and there’s the added complication that both Ruth and Eileen think Bob is the sort of man they’ve been looking for. 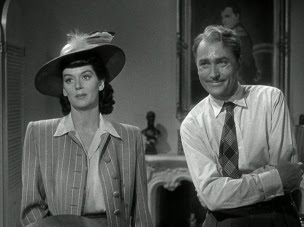 In true screwball comedy style the action is frenetic and everybody is working at cross purposes and everything gets crazier and crazier, culminating with half the Portuguese merchant marine dancing the conga through the apartment and Eileen winding up getting arrested for starting a riot. She doesn’t mind being thrown in the cells though because she meets some very cute policemen and they’re ever so nice to her. Men just can’t help themselves where Eileen is concerned.

Most importantly though there are not just ludicrous situations, the ludicrous situations are genuinely funny. The screenplay by Jerome Chedorov and Joseph Fields gives the players plenty of good lines and they make the most of them. Director Alexander Hall keeps the pacing tight. 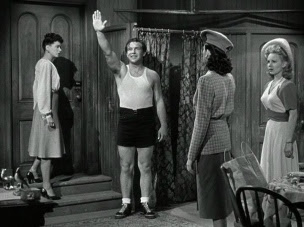 Rosalind Russell is at her sparkling best. Ruth is wry and witty and despite all the setbacks she never gives up. It’s the sort of feisty and strong but very likeable and sympathetic character that she played so well. She gets plenty of solid support from the rest of the cast. Janet Blair is suitably ditzy as Eileen and proves to be the perfect foil for Rosalind Russell.

This is classic screwball comedy with the right mix of laughs, madness and romance. A total delight and a definite treat for Rosalind Russell fans. 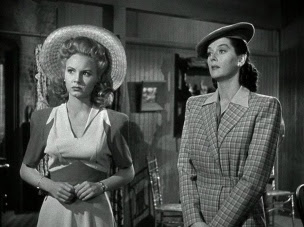 This is one of the movies in volume 1 of the Columbia Icons of Screwball Comedy series. Each volume contains four movies and both are well worth grabbing.
Posted by dfordoom at 1:35 PM