Before establishing himself as one of the masters of gothic horror director Terence Fisher honed his skills making crime B-movies like The Unholy Four (original British title The Stranger Came Home) for Hammer Films in the early 50s.

Some of these films, such as Stolen Face, were excellent. Others, such as The Unholy Four, were not so good. It’s still a competent crime thriller if you don’t expect too much from it. 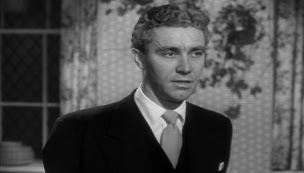 Philip Vickers (William Sylvester) suddenly returns home after a mysterious four-year absence during which time he had been presumed dead after an accident on a fishing trip. No-one is particularly pleased to see him back, including his wife Angie (Paulette Goddard) and the three friends who had been with him on the ill-fated fishing trip. The truth is that the four friends on that fishing boat in Portugal were not especially good friends. The main problem between them was Angie Vickers. It seems that at least two of Philip’s companions had been in love with her while Philip’s rather prickly personality didn’t endear him to anyone.

Philip’s story is a strange one. During a trip ashore, a trip that had involved a considerable consumption of intoxicating beverages, someone slugged Philip and pushed him into the water. They had already drugged him by doctoring his drinks. They assumed (and hoped) that he had then drowned. But he didn’t drown. He survived, but was left with a head injury that left him with a four-year case of amnesia. Eventually hazy memories came back to him, memories of the voice of his would-be murderer, but he can’t identify the voice. Now that he’s back the old tensions are back as well. Angie’s admirers have been competing for her affections and Philip Vickers’ temper has not been improved by his four lost years. When Harry, one of the four men from that fishing trip, is found dead Vickers seems the obvious suspect. But not the only suspect. Angie had been annoyed by Harry’s attentions so she might have killed him, and given that the marriage is less than blissful she might also have a motive for pointing the finger of suspicion at Philip. And Bill Saul (Paul Carpenter) would have had an equally good motive - to get both Angie’s husband and one of her suitors out of the way. Angie’s live-in companion/secretary Joan also had a motive for killing Harry and an even better motive for wanting to frame Philip. Inspector Traherne (Russell Napier) has too many suspects and not enough solid evidence.

And all the suspects seem to getting edgier and edgier, making them all even better suspects. 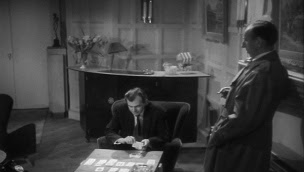 Fisher had not yet reached his peak as a director but he understood the basic rules of low-budget film-making - keep it moving along, keep it focused and don’t be tempted by unnecessary visual gimmickry. The workmanlike if not overly inspired screenplay by Michael Carreras was based on a novel supposedly by George Sanders although it was apparently ghost-written by Leigh Brackett.

Hammer’s invariable practice at this time was to import an American star who was either a second-rank star or whose box-office appeal was starting to falter - in other words someone who would be happy to get a starring role in a B-picture without wanting too much money. This policy worked surprisingly well with George Brent and Lizabeth Scott both giving superb performances in Hammer noirs. Paulette Goddard is rather less impressive. William Sylvester and Paul Carpenter are quite good though. 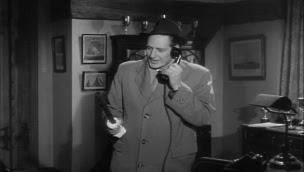 VCI paired this one with another Terence Fisher film, A Race for Life, in their Hammer Film Noir Volume 7 double-header. It’s a very decent print.

It’s more a psychological thriller/murder mystery than a film noir and while it fails to reach any great heights it’s a harmless enough time-killer. If you’re anxious to check out Hammer’s film noirs then go for the excellent Bad Blonde/Man Bait or the Stolen Face/Blackout double-headers (Volumes 1 and 2 respectively in this series) in preference to this one.
Posted by dfordoom at 7:46 PM