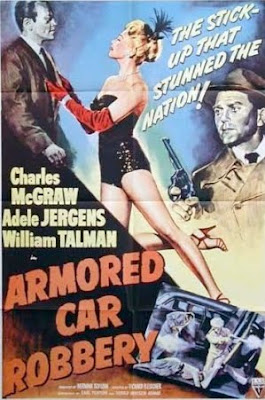 Armored Car Robbery is not a film noir. It’s a tough gritty crime B-movie, more a police procedural in many ways, and it’s a very good one.

Made by RKO in 1950 it does have the film noir look with lots of night scenes, lots of scenes in dockside areas, cheap motels and the like - the whole paranoid seedy big city underworld feel.

Dave Purvis (William Talman) is a criminal who has always managed to say one step ahead of the law. He has no record. Now he plans a really big job - an armored car robbery. He has it all worked out. It’s foolproof.

Dave Purvis is proof that the smarter a criminal is, the dumber he is. He thinks he’s so thorough that he leaves nothing to chance. No loose ends. But right from the start chance steps in. He’s made a series of hoax calls to the police so he can time how long it takes them to get to Wrigley Field where the robbery is to take place. He knows they have three minutes to carry out the robbery. Unfortunately when the robbery actually occurs Detective-Lieutenant Jim Cordell (Charles McGraw) and his partner are two minutes away from Wrigley Field. There’s a shootout that leaves a dead cop and one of the gang badly wounded.

They make their getaway but with the wounded gang member bleeding profusely and clearly about to become a major liability.

Dave Purvis knows how to get rid of liabilities but again he’s not as clever as he thinks he is. He seems to assume that cops spend all their time sitting in police headquarters waiting for calls. It doesn’t occur to him that they spend a lot of time driving about the city making a nuisance of themselves to the criminal classes. And while doing this they have an annoying habit of noticing odd things. Odd things like cars getting pushed into the bay. And bloodstains where there shouldn’t be bloodstains.

It’s all going badly wrong and Lieutenant Cordell and his partner have found some other loose ends Dave Purvis overlooked. Like burlesque dancer Yvonne LeDoux (Adele Jurgens). She’s the wife of Benny, one of the gang members, but she’s also Dave Purvis’s girlfriend. The police are closing in but Purvis still thinks he holds all the aces.

Director Richard Fleischer was no auteur but he made some good films during his long career, including another classic crime B-movie, The Narrow Margin. Armored Car Robbery is cut from the same cloth as The Narrow Margin - a taut fast-moving very tense crime thriller.

Armored Car Robbery is an object lesson in film-making - there’s not a single unnecessary minute in the film, and there’s not a single minute that needs to be added. It’s an absolute model of efficiency. The planning of the robbery, the robbery itself, the hunt for the gang, the personalities of the key characters - all are sketched in with extraordinary economy. Never spend five minutes on a sequence that could be done just as effectively in three - that seems to be Fleischer’s motto here and it’s one of the secrets of making great thrillers.

There’s nothing fancy in Fleischer’s and there’s nothing fancy about the acting either but all the performances are effective. Charles McGraw is a great laconic hardboiled cop. William Talman is excellent as the egotistical and vicious Purvis and Adele Jergens is wonderful as the opportunistic and equally vicious burlesque queen.

It’s a low-budget movie that succeeds perfectly in doing what it sets out to do with energy and style and with a minimum of fuss, and without getting distracted by anything that is not strictly necessary. A great example of the crime B-movie at its best.

It was released on DVD in Region 1 by Warner Home Video and in Region 2 by Odeon. My copy is the Odeon version and it can’t be faulted. Highly recommended.
Posted by dfordoom at 2:32 AM