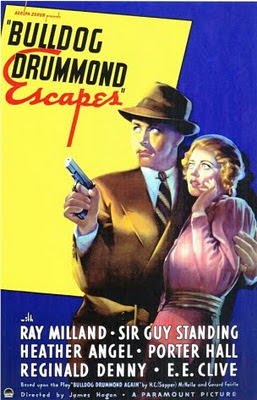 The Bulldog Drummond novels by Herman C. McNeile (“Sapper”) are highly enjoyable thrillers but sadly none of the many adaptations really capture their spirit. The two mid-60s British films are great fun spoofs but turn the hero into a kind of James Bond clone while the Paramount films make him a bit too smooth. In the novels the character is certainly a gentleman, but he’s a tough guy as well and rather edgy with a strong streak of ruthlessness mixed with chivalry and reckless bravery. Ray Milland payed Drummond in Bulldog Drummond Escapes but in the later films John Howard takes over the role.

Bulldog Drummond Escapes with Captain Hugh “Bulldog” Drummond returning back home to England. On a misty country road he is flagged down by a young woman who then proceeds to steal his car. The lady left her bag in the car and when he has retrieved his car he drives to Greystone Manor to return it. He is informed that the young lady is suffering from a persecution complex but the doctor who is treating her, along with the middle-aged man an his sister who are caring for her, seem to Drummond to be behaving just a little suspiciously. Drummond immediately senses that adventure may be afoot. And there’s nothing he likes better. His sense of chivalry also helps in convincing him that this unfortunate young woman is a damsel in distress and in need of rescuing. Inspector Nielson of Scotland Yard warns him off the case which naturally makes him even keener.

His pal Algy Longworth is axiouusly awaiting the birth of his first child but Hugh ropes him in anyway. Hugh finds a letter that confirms his suspicions. He still lacks hard evidence but he feels he needs to act even if it puts him (temporarily) on the wrong side of the law. The movie suffers a little from the problem that afflicts so many American B-movies of that era - too much emphasis on jokiness and not enough on suspense. Algy is played purely as a comic relief character which becomes just a little irritating. Of course if you haven’t read the books this might not worry you so much, but if you have read them you’ll find yourself wishing they’d been more faithful to the tone of the source material. Not that the books are overly serious - they’re essentially just adventure yarns (and very good ones) but without the quite unnecessary comic relief.

Ray Milland is an actor whose work I enjoy enormously. While he’s a lot more polished than McNeile’s original creation he’s charming enough to get away with it. The support cast is adequate enough. Bulldog Drummond Escapes is reasonable lightweight entertainment and it’s worth a look.

My copy comes from one of the MiIl Creek public domain boxed sets. DVD picture quality is awful but watchable and the sound quality is absolutely deplorable. The best thing that can be said about it is that the dialogue is at least understandable.
Posted by dfordoom at 1:54 AM