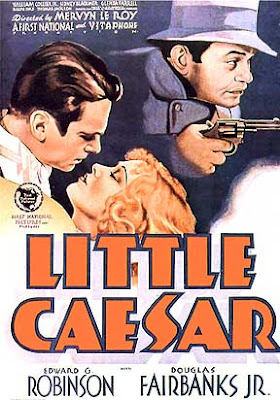 Little Caesar was released at the beginning of 1931 and it’s the movie that largely defined the gangster movie as a genre. It also made Edward G. Robinson a star.

The movie literally starts with a bang. In fact two bangs as two small-time hoodlums, Caesar Enrico "Rico" Bandello (Robinson) and Joe Massara (Douglas Fairbanks Jr.), commit a gas station robbery and two shots are fired. Rico has no intention of staying small-time. He’s going to be a big shot. Joe on the other hand really has no taste for crime. He wants to be a dancer.

They make the move to the big city and Rico quickly establishes himself as the right-hand man of gangster Sam Vettori. Joe gets hired as a dancer in a night-club and falls in love with his dancing partner. Rico’s rise in the criminal underworld is swift but already early on in the movie we see that he has the fatal flaws that will bring him down. As we see in the robbery of the night-club where Joe Massara is now working as a dancer, he is decisive and ruthless, but his judgment is dubious and he is over-confident. He is too quick to use his gun, a mistake that will come back to haunt him.

Rico continues to rise. He and Joe have lost touch, until Joe overhears plans to have Rico killed and sends a warning to Rico. Rico now decides that it’s time to bring Joe back into his organisation. He needs a reliable right-hand man. Rico’s inability to understand that Joe really is determined to have done with crime is his second fateful mistake.

Joe is pushed into a corner where he has to choose between betraying Rico or spending his whole life running. Rico’s nemesis, Detective-Sergeant Flaherty, may be able to get the break he needs to destroy Rico.

Mervyn LeRoy isn’t as celebrated as Howard Hawks or William A. Wellman, who directed the other great early gangster classics Scarface and The Public Enemy but he was extremely competent. To say, as some critics have said, that the one thing that makes Little Caesar exceptional is Edward G. Robinson’s acting is a trifle unfair.

There is certainly no doubt about the greatness of Robinson’s performance however. So much has been written about it that it’s difficult to find anything to add. He’s a wound-up spring of manic energy and menace. Douglas Fairbanks Jr’s performance has been less admired. He was a fine actor but is perhaps just a little too civilised and too nice to be a convincing hoodlum, but then the key to Joe’s character is that he knows himself that he isn’t cut off for a career as a gangster. It’s also an essential plot element that Joe should be a guy who is capable of passing in both worlds, the world of the racketeer and the world of the cultured sophisticates who haunt the expensive nightclubs the gangsters use as a front.

If you’re determined to see every movie through a political prism you can try to force Little Caesar into that mould and see it as the dark flipside to the American Dream or a comment on the evils of capitalism or the despair of the Depression. In reality there’s absolutely nothing in this movie to support such an interpretation. That of course won’t stop film school types from trying.

The author of the novel on which the movie is based, W. R. Burnett, described Rico as a gutter Macbeth and that is the key to what the movie is really about. It’s a kind of ironic parody of classical tragedy. Rico’s single-minded ambition will carry him to the top but the qualities that put him there will drag him back to the gutter again and to his ultimate destruction.

The DVD includes a commentary track by Richard Jewell, a film historian at the University of Southern California. Unfortunately much of what he has to say is the sheerest nonsense. Being an academic he is determined to give the film the correct left-wing political spin. At one point he assures us that Rico could never have reached the very top of the criminal underworld because of the rigid class barriers in the US. One can only assume this guy has never heard of Al Capone. It’s particularly ironic to hear such poppycock from a film historian given that Hollywood itself was a classic example of an industry in which class barriers were non-existent. While a political interpretation might be valid in the case of some other Warner Brothers gangster films the fact is that Little Caesar is remarkably apolitical.

He does, to his credit, admit that the gay interpretation that many have tried to give the film doesn’t really hold water. The gay interpretation is based on scenes such as the one in which Rico is trying on his first dinner jacket and preening himself in front of a mirror. That scene is clearly meant to show us one of the flaws that will bring Rico undone - his overwhelming vanity. That vanity, and the fact that Rico doesn’t have the cool judgment or the intelligence to back up his incredibly high opinion of himself, is stressed again and again in the movie.

As for the relationship between Rico and Joe Massara it always amazes me that so many people today are incapable of comprehending the idea of a relationship between men that isn’t sexual. W. R. Burnett apparently felt the movie could be seen as suggesting that Rico was homosexual and was annoyed by this but I really think he was equally mistaken. The fact that Rico has no involvement with women simply stresses his isolation from his fellow creatures, an isolation that makes him vulnerable in the case of Joe Massara because Joe is the only person who truly likes Rico and shows any genuine loyalty to him.

The friendship between Rico and Joe serves to underline just how twisted Rico’s view of humanity is. While Joe understands real friendship Rico uses Joe the same way he uses everyone else. He wants Joe to be his loyal lieutenant because he needs simple he can trust not to betray him, and someone who can act as a useful front man. It doesn’t occur to Rico to consider Joe’s wishes. In the most crucial scene of the movie, when he realises he will have to kill Joe, Rico gets his first glimpse of what true friendship might mean. Even a man as evil as Rico still has some tiny shred of human decency deep within him but it is too late for Rico.

Rather than taking a political stance the film puts the focus squarely on Rico, on the strengths that allow his rapid rise (his self-confidence, his decisiveness, his ruthlessness) and the weaknesses that cause his equally rapid descent (his isolation and his vanity). There is no mention of the Depression or of Prohibition, no mention of impoverished childhoods, no social context whatsoever. This is the film’s great strength. It makes it a timeless story with universal significance rather than a topical political tract. This makes it very unusual for a 1930s Warner Brothers film.

There had been gangster movies before this film and there would be many more afterwards but Little Caesar remains the greatest of them all.
Posted by dfordoom at 10:06 PM