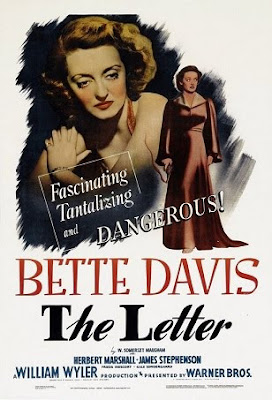 The Letter, directed by William Wyler for Warner Brothers in 1940, contains what may well be Bette Davis’s finest performance. And it’s a great film.

It’s hard to go wrong when adapting a Somerset Maugham story for the screen. For some reason his stories just work perfectly as movies.

The setting is a rubber plantation in Malaya, some time during the 1930s (the war is never mentioned so it’s clearly some time before 1939).

The famous opening sequence is one of the best you’re ever going to see, with Bette Davis emptying a revolver into a man. We have no idea who he is or why she shot him, or why she kept on shooting him after long after he was obviously dead.

The District Officer and her lawyer are sent for and Leslie Crosbie (Davis) tell her story. The man she shot was Peter Hammond, another planter. He had made unwanted advances to her, there had been a struggle, she had grabbed her husband’s revolver and being so upset she hadn’t realised that she had just kept on pulling the trigger. Everyone is very sympathetic. Her husband Robert (Herbert Marshall) arrives shortly afterwards and he is very sympathetic as well. Clearly she had had no choice.

Of course the District Officer has no choice but to arrest her and she will have to stand trial for murder in Singapore but no-one has the slightest doubt she will be acquitted. Until her lawyer, Howard Joyce (James Stephenson), receives information that a letter exists. A Very compromising letter. A letter written by Leslie to the deceased, begging him to come to her while her husband was away. Apart from being very damaging in itself, suggesting n intimate relationship between her and Hammond and casting extreme doubt on her story of being suddenly attacked for no reason, its existence also flatly contradicts the statement she made that she had had no contact of any kind with Hammond for many weeks and that he was no more than a casual acquaintance.

The existence of the letter makes it more than likely that Leslie will be convicted and hanged. Howard Joyce is an honourable man but against his better judgment he is persuaded to try to buy the letter. At the very least this could end his career and he might well face criminal charges for attempting to pervert the course of justice.

The letter is in the hands of Hammond’s widow, a Eurasian woman. She insists she will not sell the letter unless Leslie comes to her personally and at their meeting her hatred for Leslie is all too apparent. But she sells the letter.

It would seem that Leslie is now out of the woods but the killing has had consequences for everyone concerned, for Leslie, for her husband and for Howard Joyce. It may well end by destroying all their lives.

William Wyler was renowned for being a perfectionist who was capable of forcing an actor to do take after take after take and as a result many actors hated working for him. Bette Davis was one of the few who appreciated that Wyler’s methods worked and he got extraordinary performances from her. In a role which could easily have become histrionic and excessively mannered Davis turns in a subtle and controlled performance.

Herbert Marshall and James Stephenson are also superb. While Leslie dominates the film both Robert and Howard Joyce are complex characters thrown into emotional turmoil and not always entirely certain of their own motivations. They are in fact more complex than the self-centred and selfish Leslie.

The visual style certainly has affinities with film noir, although film noir would not truly arrive on the scene for another year or two. The use of shadows and moonlight and in particular the use of light broken up by slatted blinds suggest that The Letter might well have been a major influence on the noir style.

The movie deals indirectly with the effects of colonialism, especially the effects on the representatives of the colonial power. Boredom, despair, alcoholism and adultery are obviously the major ingredients in life in colonial Malaya.

The temptation to give this movie a feminist reading and to treat Leslie as some kind of victim is a temptation that should be strongly resisted. She is a complete monster, thoroughly evil and manipulative. One can’t help suspecting that the signs of remorse she displays have nothing to do with genuine remorse but are merely signs of self-pity and of her frustration that she has been found out and that her elaborate lacework of lies has come unravelled. Leslie’s favourite hobby is lacework and to me the symbolism is clear enough - she constructs intricate patterns of lies and manipulations rather like a spider spinning a web of deception.

Apart from the visual elements there are some thematic similarities to film noir. I suppose you could it tropical noir. It’s a superbly crafted film and fully justifies Wyler’s methodical and perfectionist approach. A great movie.
Posted by dfordoom at 10:30 PM