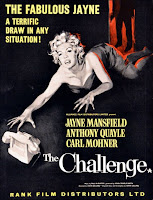 The Challenge (released in the US as It Takes a Thief) is a Jayne Mansfield film noir. That might seem a pretty unlikely concept so you’re probably sceptical at this stage. It does co-star Anthony Quayle and it does have a pretty good director in John Gilling and those two facts were enough to persuade me to give it a chance.

Gilling was responsible for some of Hammer’s best horror movies of the 60s (such as The Reptile and Plague of the Zombies) so there’s no question about his ability to create a sinister atmosphere.

Mansfield plays Billie, leader of a criminal gang in London. She has a plan to pull off a daring bullion robbery and she involves Jim (Anthony Quayle) in the venture. Her exact intentions towards Jim remain ambiguous. They’re lovers but whether she really loves him is uncertain and whether she intends to double-cross him remains equally obscure.

The problem is that Billie’s control over her gang is far from complete. Kristy (Carl Möhner) takes orders from her reluctantly, partly because he resents Jim (he wants Billie for himself) and partly because he simply wants to run the gang himself.

Jim is the chump. He’s a nice guy battling to raise a 6-year-old son after his wife’s death. He doesn’t want anything to do with crime but he’s under Billie’s spell and she promised him it would be just one job and then they’d buy a farm together. His job is not to take part in the actual robbery but to take the loot and hide it after the robbery. Kristy clearly intends that Jim should be the fall-guy. 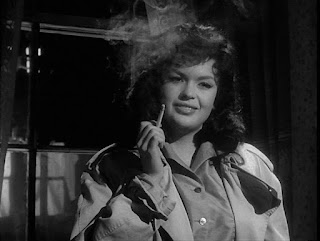 Whether Billie intends this or not is uncertain but either ay he does become the fall-guy and serves five years in prison. Wen he’s released he’s determined to go straight but the money is still hidden somewhere and the gang wants it. The police have him under surveillance, hoping he’ll lead them to the money or to his accomplices.

Billie meanwhile has been doing very well. After pulling off a series of successful robberies she’s now running a strip club. Her control over her gang has however become even less sure. They’re determined to get the money from the bullion robbery no matter how they have to do it while Billie wants the money but she doesn’t want any harm to come to Jim. She’s a criminal but she hates violence and she clearly has some feelings towards Jim even if she herself is probably not really aware how strong those feelings might be.

Kristy is untroubled by any such scruples and without telling BiIlie he has Jim’s son kidnapped to put pressure on him to reveal the whereabouts of the loot. Jim has to find a way to get his son back which is not going to be easy with the police watching him. The power struggle between Billie and Kristy meanwhile comes to a head. 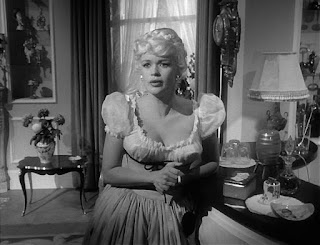 The classic B noir was pretty much dead in Hollywood by 1960 but the British were still making moody atmospheric low-budget crime films, and doing a very good job of it. The Challenge is a fine example. The plot is nothing special but Gilling’s stylish and energetic directing propels it along in a very entertaining manner. In the early stages in particular there’s plenty of very noirish black-and-white cinematography.

There are also some very decent action sequences, especially the scene with Billie (who was the driver for the gang as well as being the mastermind behind their plans) leading the police on a fairly spectacular (by the standards of 1960) car chase. There’s plenty of tension as well as Jim races to save his son from the psychopathic Buddy. 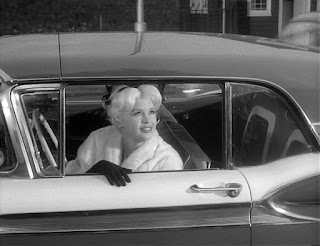 Whether it’s a true film noir is debatable but it certainly has a femme fatale and it has an ordinary man caught drawn into murky and dangerous waters but he’s not a true noir protagonist because he’s never in danger of being corrupted by the noir underworld. It’s more a Hitchcock-style thriller with noir overtones and a dash of sleaze.

Anthony Quayle is very good, as always. The key character though is Billie and that’s where the movie potentially has a problem. It’s the sort of role that would have been tailor-made for Diana Dors who would have pulled it off effortlessly but Jayne Mansfield (who was a fine comic actress) isn’t in the Diana Dors class as a serious actress and doesn’t really have the acting chops for such a complex role. But she gives it her best shot and she’s a lot better than one might have expected. 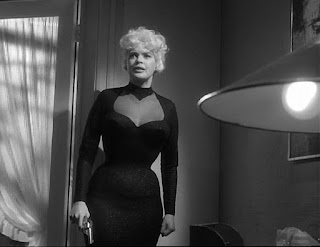 This is very much a B-movie but it’s consistently entertaining and well worth a look for fans of gritty crime movies. Renown Productions’ UK region-free PAL DVD release lacks extras but it’s a very nice transfer of a little-known and underrated movie.

You also get to see Jayne Mansfield wearing one of the most bizarre dresses ever worn by an actress. She looks little Little Bo Peep, if Little Bo Peep had decided to forget the sheep (which keep getting lost anyway) and head to the big city to take up a career as an exotic dancer. If I’d been her I’d have asked for extra money for wearing that dress.

The Challenge isn't perfect but it's worth seeing. Highly recommended.
Posted by dfordoom at 10:25 PM