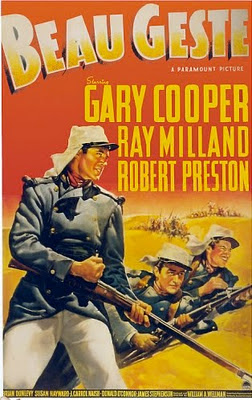 I have a real soft spot for Gary Cooper. I know he’s not everyone’s favourite, that many people consider him wooden, but I’m finding that I like him more and more. In particular I think he’s very underrated as a comic actor. Beau Geste gives him some opportunities to display this side of his talent but mostly it’s an old-fashioned adventure film. And a very very good one.

The three Geste brothers are orphans who’ve been raised by the kindly Lady Patricia Brandon, along with the mildly obnoxious heir to the Brandon fortune, Augustus Brandon. The eldest of the Geste boys is Michael, known as Beau (Gary Cooper). The youngest, John Geste (Ray Miland), is in love with Lady Patricia’s daughter (played by a very young Susan Hayward).

Unfortunately much of this fortune has been gambled away by Lady Patricia’s dissolute husband, Sir Hector Brandon. In fact only one real treasure remains to the estate is the fabulous sapphire, the Blue Water. Until the days comes when that too must be sold. Except that it is mysteriously stolen, and Beau just as mysteriously disappears. His brother Digby (Robert Preston) soon departs as well, followed by John.

Needless to say the general assumption is that on of the Geste boys has stolen the sapphire. And where have the three brothers gone? They’ve gone to join the Foreign Legion.

There they find themselves exposed to the none-too-tender mercies of the brutal Sergeant Markoff (Brian Donlevy). He’s as avaricious as he is brutal and he soon gets and of the fact that one of the Geste brothers almost certainly has the Blue water sapphire. And he wants it.

He also wants command. The actual commander of Fort Zinderneuf is Lieutenant Martin but when he falls ill of fever Markoff sees his chance. If Martin dies, which seem certain, he will assume temporary command, but if he can do something incredibly heroic and impressive he would have an excellent chance of getting a commission. Something like putting down a mutiny would do just fine. If there’s no mutiny in the offing, he can always manufacture one. All he has to do is push the men hard enough.

After their experience of Markoff’s sadistic command style most of the soldiers are ready to give him the mutiny he wants. Except for the Geste brothers, Beau and John (Digby has been posted elsewhere), and a handful of others. At this moment a horde of Tuaregs arrives on the scene and mutiny has to take a back seat to survival. For Markoff it’s another opportunity - a heroic defence of the fort will do just as well to earn him his commission. And whatever his failings, Markoff is an able soldier.

The epic defence of the fort provides some spectacular action scenes, ably handled by director Wiliam A. Wellman. We already know the final result since the opening scene of the movie showed us the arrival of the relief column and the shocking discovery they made when they entered the fort. The rest of the movie is essentially one long flashback which will provide the explanation of their discovery.

The cast is uniformly superb. Brian Donlevy goes close to sealing the picture but really everyone plays their parts to perfection.

This is a thrilling combination of action, romance, adventure, old-fashioned heroism and high drama, the sort of things movies were all about back in the days when Hollywood made great movies.
Posted by dfordoom at 9:19 PM