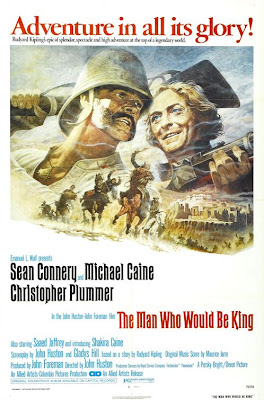 It took John Huston a quarter of a century to bring Rudyard Kipling’s The Man Who Would Be King to the big screen, but the wait was worth it.

Like almost everybody who has read Kipling’s original short story Huston had fallen in love with, and being a fikm-maker he recognised that not only would it make a great movie, it would it make a great John Huston movie. His first idea was to cast Clark Gable and Humphrey Bogart in the lead roles, but every time he thought the film was going to happen something went wrong. He had almost given up hope, and then in 1975, courtesy of producer John Foreman, he finally got his chance.

In some ways Huston was fortunate he had to wait until 1975 to make this move. While Gable and Bogart could certainly have played the leads there’s no question that Sean Connery and Michael Caine were much more suited to the roles.

The story opens in India in the late 19th century with an encounter on a train between a newspaper reporter named Rudyard Kipling (Christopher Plummer) and a very disreputable character named Peachy Carnehan (Michael Caine). Peachy has just stolen Kipling’s watch, but he then looks at the medallion attached to the watch chain discovers to his horror that he has robbed a fellow Freemason. Peachy is a rogue, a cheat, a blackmailer and a thief but he does have a moral code of his own and stealing from a a brother Mason is something he could never do.

As a result of this chance meeting Kipling gets to meet both Peachy and Peachy’s partner-in-crime, Daniel Dravot (Sean Connery). And Kipling comes to learn of their plan. Peachy and Daniel have decided that India is too small for men such as them. They are planning to journey to Kafiristan to become kings. To reach Kafiristan they must pass through Afghanistan and Kipling assures them they will never make it alive.

Peachy and Daniel are not deterred. They have spent every penny of their ill-gotten gains on the purchase of twenty Martini rifles. Being ex-British Army NCO’s they know how to train men to fight and they are confident they will soon carve out a kingdom. Kipling expects that he will never hear from them again but three years later he hears their tale. They achieved their goals, they won their kingdom, but at a terrible price.

Since the source material was a short story a considerable amount of expansion was necessary to make a feature film (the screenplay was co-written by Huston and Gladys Hill).The extra material is a perfect fit with Kipling’s original tale and adds to the power of the story. In particular the movie stresses the extent to which Daniel comes to believe in his destiny. He had always believed in his destiny of course of course but he had thought his destiny was to become fabulously rich by plundering a kingdom. Now he realises there was more to it. He has been hailed as the son of the legendary Sikander (Alexander the Great who conquered northern India in 328BC). Daniel starts to believe he really is the successor to Sikander.

Freemasonry played a role in Kipling’s story but it’s even more important in the film, providing the key to the recognition of Daniel as a god as well as a king and leading him on to a dangerous self-delusion.

Connery and Caine are magnificent. These are larger-than-life characters and they pull out all the stops. The support cast includes Michael Caine’s wife Shakira in one of her rare acting appearances.

The location shooting (done mostly in Morocco) is spectacular, the action sequences are impressive, the movie looks absolutely glorious. It has all the themes that were bound to appeal to John Huston - it’s a story of friendship, of aspirations that are insanely excessive and bound to have tragic results, of greed and ambition, of loveable rogues who are dishonest but brave, and it’s a story of obsession. It was perfect material for the man who’d made movies such as The African Queen, Beat the Devil and Moby Dick. It’s a story that is at times very moving but with a sense of fun mixed with tragedy, and with tragedy mixed with irony.

Of course such a movie could never get made today. It would be accused of cultural insensitivity and countless other sins against political correctness.

This has always been one of my favourite movies of all time and it still stands up as well as ever. Very highly recommended.
Posted by dfordoom at 12:06 PM