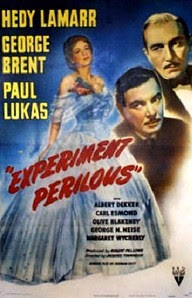 Experiment Perilous could, at a stretch, be described as belonging to the sub-genre of gaslight noir. Made at RKO in 1944 and directed by Jacques Tourneur, it’s an entertaining psychological thriller.

In 1903 Dr Hunt Bailey (George Brent) meets a middle-aged woman named Cissie Bederaux on a train. She seems rather nervous and informs Bailey that although she’s returning to her family in New York she is determined not to live with them. Her manner suggests something wrong, and Dr Bailey being a psychiatrist naturally takes note.

On arrival in New York he finds himself drawn into the Bederaux family’s orbit. Cissie’s wealthy brother Nick (Paul Lukas) is married to a much younger woman, the astonishingly beautiful Allida (Hedy Lamarr). It doesn’t take long to become obvious that all is not well in the Bederaux household.

Nick is worried about Allida’s nerves and believes she is displaying a neurotic anxiety over their son. He seem to be trying to persuade Dr Bailey to take her on as a patient, or at least to provide some medical support for his concerns. Dr Bailey however is developing an interest in Allida that has nothing to do with medicine. He is apparently just the latest in a long line of men who have fallen under her spell.

It would be helpful if Bailey could discuss things with Cissie as she seemed to know some secrets about the Bederaux family’s past. Unfortunately Cissie died mysteriously soon after arriving in New York. As it happens an item of Cissie’s luggage had been mixed up with Dr Bailey’s on the train trip, and as luck would have it that item of luggage contained not only Cissie’s diaries but also a lengthy account she had written of Nick’s childhood. Dr Bailey can’t restrain himself from reading this account, and now he is developing his own theories about what is going on. It’s a story of suicide, madness and murder and Dr Bailey suspects there may be more murders to come.

With a fine screenplay by Warren Duff and with Jacques Tourneur’s usual quietly stylish approach as director this is an effective little thriller. The film noir label that has been applied to it by some is not entirely convincing but it’s a good movie in its own right.

Paul Lukas and George Brent give solid performances. Hedy Lamarr is however the star and she gives a nicely nuanced performance, carefully avoiding the temptation to play Allida as a hysteric.

The psychologically unwholesome atmosphere in Nick Bederaux’s house is captured effectively, and the hall of fish tanks is a nice touch suggesting unhealthy decadence.

Odeon’s UK DVD release is barebones but picture and sound quality are excellent.

An obscure movie that deserves to be better known. Recommended.
Posted by dfordoom at 4:29 PM