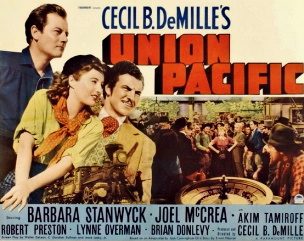 Union Pacific is a 1939 Cecil B. DeMille western, and in the story of the building of the first tran-continental railroad he found a tale with the grand sweep required of a DeMille movie. Released in 1939, it confirmed DeMille’s ability to make wonderfully entertaining epics.

In the 1860s the Union Pacific railroad is being built from east to west to link up with the Central Pacific railroad in California. Backroom deals by crooked bankers have in effect turned the project into a race with the Union Pacific facing ruin if they lose. And those who are determined that they will lose have hit upon an ingenious method of sabotage. Sid Campeau (Brian Donlevy) has been given the job of supplying the workers building the railroad with cut-price booze, gambling and other distractions to slow down the construction. 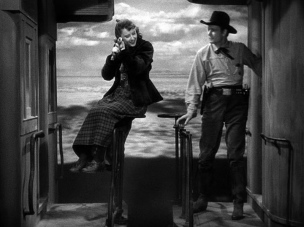 Butler cleans up a lot of the problems by shooting people like gambler Jack Cordray (Anthony Quinn). He has more of a problem with Campeau’s chief lieutenant, Dick Allen (Robert Preston). He and Dick were old army buddies and they’re still good friends but now they’re on opposite sides. Even worse, they’re romantic rivals as well. They’re both in love with feisty Irish beauty Mollie Monahan (Barbara Stanwyck). 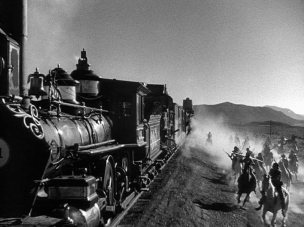 Mollie is the Union Pacific’s travelling postmistress. Her father is an engine driver. She was born into the world of the railways, it’s the only world she knows and she loves it.

While Jeff Butler is kept busy trying to counter the machinations of Sid Campeau Dick Allen has stolen a march on him in the romance stakes and Dick and Mollie are soon engaged. Jeff is too noble to do anything underhanded to come between them although he’s clearly still carrying a torch for Mollie. 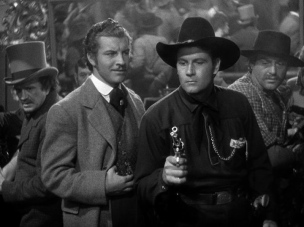 The villains are suitably villainous and the heroes are suitably heroic. The cast is a strong one and all the players deliver exactly the performances that were required.

There’s plenty of action and excitement, there’s spectacle, there’s romance, there’s everything required to turn this film into box office gold and it was indeed a huge hit at the time. It might seem like an old-fashioned movie by today’s standards when we’re accustomed to seeing heroic subjects treated with cynicism and sneering, but it demonstrates that old-fashioned Hollywood showmanship has a great deal going for it. This is a supremely entertaining movie. 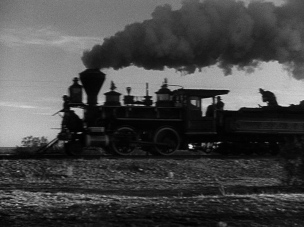 It’s also very politically incorrect - if that bothers you then you’re not going to like this movie one little bit.

Union Pacific is highly recommended and it's included in the wonderful DeMille DVD boxed set that came out a few years back, a set which I also recommend very very highly.
Posted by dfordoom at 11:54 PM