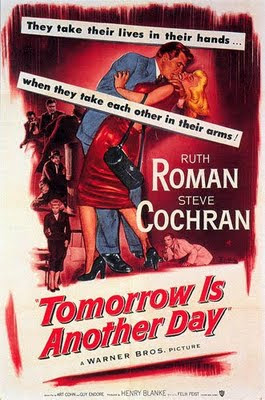 The most interesting thing about Tomorrow Is Another Day is the way in which it departs from our expectations. It does this most notably in its treatment of the femme fatale.

This 1951 Warner Brothers B-movie was directed by Felix E. Feist. Feist was always a B-movie director but he made some interesting if rather uneven noirish crime thrillers. Screenwriter Guy Endore worked on some notable horror movies and his own novels provided the basis for several good films, including Otto Preminger’s Whirlpool and the excellent 1961 Hammer gothic horror flick Curse of the Werewolf.

Tomorrow Is Another Day is a story of an ex-con trying to go straight. Bill Clark (Steve Cochran) was convicted of the murder of his violent alcoholic father at the age of thirteen. After eighteen years he is released. Not surprisingly he knows little of women but he’s anxious to learn. Perhaps a dance hall was not the best place in which to commence his education but that’s where he ends up.

At the dance hall he meets taxi dancer Cay (Ruth Roman). Cay is hardbitten and cynical but to Bill she’s the girl of his dreams. He finally manages to get invited back to her apartment and that’s when things start to go wrong. A loud-mouthed bully storms into the apartment and starts pushing her around, a gun is produced, Bill takes a heavy knock on the head and passes out and when he regains consciousness it’s to see the other man staggering out of the door with a gunshot wound in his belly.

All that would be bad enough but the guy with the bullet in his gut turns out to be a cop. Worse still, a detective-lieutenant. Realising that Bill has no memory of what happened Cay convinces him that he shot the detective when in fact she was the one who pulled the trigger.

Since this is a crime movie it doesn’t occur to either of them that Cay in fact shot the detective in self-defence, and maybe if I’d just been released from prison I’d be sceptical about getting a fair hearing as well. So now they’re on the run. And Bill comes up with a clever idea - since they’re on the run together they might as well get married!

Surprisingly enough Cay thinks this is a swell idea. Even more surprisingly she now turns out to be the ideal wife. This is the part of the story that challenges plausibility a little, although I guess if two people are thrown together in such circumstances it’s not impossible that love might suddenly blossom.

They end up fruit-picking in California which goes well until they encounter the one thing that every criminal on the run most fears - a kid with an enthusiasm for true crime magazines. And of course the kid comes across an article about America’s youngest convicted killer, Bill Clark.

Steve Cochran gives a pretty good performance as Bill, a likeable guy who just hasn’t had the breaks. Ruth Roman as Cay has the more difficult role since she has to sell her sudden personality change to the audience, which she does more successfully than you might expect.

This is as much a romantic melodrama as a film noir. It actually makes a refreshing change from the self-pity and misery and nihilistic despair that so often are part of the film noir package. It’s a movie about hope and if you’re too cynical to believe in hope or in true love then you probably won’t like it. Personally I don’t mind movies that actually make me feel slightly better about humanity and about life and I enjoyed it.

The Warner Archive DVD-R offers a very good print of this rather overlooked movie.
Posted by dfordoom at 10:26 AM