The Saint Strikes Back was the first of five films in which George Sanders played the role of master criminal-turned crime-fighter Simon Templar. The role requires a mixture of sophistication, humour, physical menace, ruthlessness and charm. Sanders didn’t quite have the physical menace but he had all of the other qualities in abundance.

The movie is based on one of the best of Leslie Charteris’s early tales of The Saint, Angels of Doom (also published as The Saint Meets His Match and She Was a Lady). Valerie Travers (Wendy Barrie), the daughter of a police officer who had been dismissed from the force for corruption, becomes a criminal mastermind. Her objective is not crime itself but revenge as she believes her father was innocent. Simon Templar becomes involved when a mobster is gunned down in a San Francisco night-club. The convoluted plot sees the Saint targeted as a suspect while he works in uneasy partnership with his old friend Inspector Henry Fernack to clear the reputation of Valerie’s now deceased father. 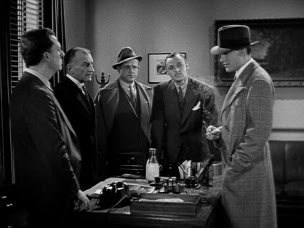 The plot is serviceable but the main asset of the movie is the character of Simon Templar and, even more particularly, George Sander’s performance. John Twist’s screenplay gives Sanders plenty of sparkling dialogue which he delivers with his customary panache. The strong supporting cast is highlighted by Barry Fitzgerald, Jonathan Hale as Inspector Fernack and Neil Hamilton (Commissioner Gordon from the Batman TV series). RKO’s crime B-movies always had plenty of atmosphere and this is no exception. Director John Farrow would go on to helm some notable film noir titles.

The Region 2 DVD is lacking in extras but looks reasonable enough.
Posted by dfordoom at 1:26 AM