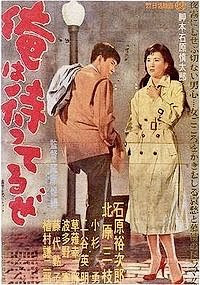 I Am Waiting (Ore wa matteru ze) is the earliest of the five movies in the Nikkatsu Noir boxed set, and it ticks enough of the noir boxes to satisfy most noir enthusiasts.

Jôji Shimaki is a boxer who was banned from the ring after killing a man in a barroom brawl. Now he runs a bar that is a sort of refuge for outsiders and losers. His brother emigrated to Brazil a year earlier and Jôji has been waiting to hear from him so he can go and join him. Brazil is for Jôji a sort of magical talisman, a promised land where he can make a new start.

He meets Saeko. He’s a boxer who can’t box any more, she’s an opera singer whose voice has gone, reducing her to performing in sleazy dives. They’re both broken and they’re not unnaturally drawn together.

Saeko thinks she might have killed a man too, a man who was making unwelcome advances to her. Unfortunately she had become involved with some dubious characters and she has a night-club boss who is also a gangster after her for breaking her singing contract.

Jôji tries to keep Saeko out of of further trouble while at the same time pursuing an obsessive quest to find out why he hasn’t heard from his brother.

Stylistically this film is pure noir, and it has the right mood as well. Most of the characters who inhabit the world of Jôji’s bar are classic noir characters. They’re not bad people, but they’re lost and they can’t find their way back.

The movie benefits considerably from its two magnetic leads, Yûjirô Ishihara as Jôji and Mie Kitahara as Saeko. Mie Kitahara definitely has an iconic noir look. They would go on to co-star in many more films.

The mood owes as much to pre-war French film noir as to Hollywood noir, although without the extreme nihilism of the French variety. Nikkatsu was a studio trying to reinvent itself in the late 50s, trying (with considerable success) to tap into the growing youth market.

The DVD from Nikkatsu’s Eclipse series is reasonably impressive although it lacks extras. The movie is presented in its original 1.33: aspect ratio.
Posted by dfordoom at 4:16 PM