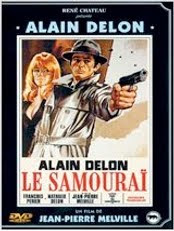 The key to understanding Jean-Pierre Melville’s Le Samouraï is to put aside any thought that the film has any pretensions towards realism. This is most definitely not a straightforward crime film.
Jef Costello (Alain Delon) is a hitman. His latest job is to kill a night-club owner. He boldly walks into the club, finds the owner’s office, shoots him and then walks out, disregarding the fact that there are at least eight witnesses who got a very good look at him. He is relying on an elaborate two-part alibi. He is quickly arrested. The alibi seems watertight but the cop in charge of the investigation has not the slightest doubt that Jef is the killer.

The alibi is strong enough to force the police to release him but he is now under constant surveillance. He has other problems as well - when he tries to collect his payment for the contract his contact tries to kill him. Now he has to find whoever it was who placed the contract before they find him.

One of the main witnesses against him is a black pianist (Cathy Rosier) who suddenly changes her story. After initially identifying him as the killer she now says categorically that he wasn’t the man. Why has she made this sudden switch? And why is he drawn to her? He is determined to find out. She seems to hold the key, although what it’s the key to remains uncertain.

As a realistic crime drama none of this makes any sense. No professional killer would ever be as reckless as Jef. The manner in which he carries out the first killing suggests that he is deliberately tempting fate, that he is challenging death, flirting with death. In fact he’s doing more than flirting. This is a man totally in love with death, or a man convinced that death is his destiny. He is drawn to the black pianist because she is Death. Perhaps she really is Death, perhaps he merely imagines this. The entire film is like the fever dream of a madman so either explanation is plausible.

He is a man who is utterly alone, disconnected from the world. He lives in a squalid decaying apartment that is devoid of any indication that it is inhabited. Like Jef, his room has no personality. He is in fact quite mad.

Alain Delon was the ideal actor for the lead role. His minimalist acting style perfectly complements Melville’s minimalist visual style. When Melville was trying to persuade Delon to take the role he read the script to him. Delon interrupted him, remarking that after ten minutes there’d been no dialogue at all. The actor then added, “That interests me. I’ll do it.”

Cathy Rosier is equally perfect as the pianist. She doesn’t do very much in the way of acting but she looks right and that is clearly what Melville was looking for. No-one in this film has to do much acting and it’s clear that Melville wasn’t interested in their acting. He cast Delon’s wife Nathalie as Jef’s girlfriend because he thought they looked like brother and sister.

Melville was a control freak who liked to oversee every aspect of his movies. He directed the film, he wrote the screenplay, he was responsible for the set design. The movie was shot in his own studio (which was destroyed by a fire during the making of this film). He was also responsible for the key visual concepts of the movie. He wanted to do a film in colour that would be more or less a black-and-white film, rather as William Wellman had done in Track of the Cat way back in 1954. Cinematographer Henri Decaë achieved Melville’s vision highly effectively.

This is a very strange movie, more like a mythic account of a samurai seeking a warrior’s death than a conventional gangster movie. A strange movie but a mesmerising and fascinating work. Highly recommended.

Picture quality on the Criterion DVD is generally fairly good although grainy at times. There are a host of extras.
Posted by dfordoom at 4:39 PM