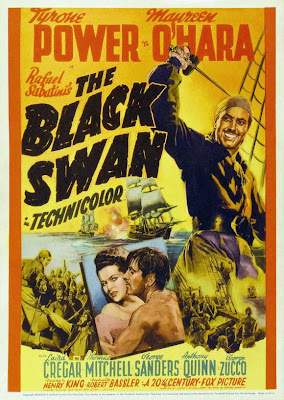 The Black Swan is a colourful pirate yarn with Tyrone Power who was at that time 20th Century Fox’s leading star of swashbuckling epics. And if those sorts of movies are your thing this one will not disappoint.

It’s purportedly based on a novel by Rafael Sabatini, probably the greatest of all authors of swashbuckling adventure stories. In fact the movie has little to do with Sabatini’s novel but it’s still great fun.

The legendary pirate Henry Morgan has been pardoned, given a knighthood and appointed as governor of Jamaica. Acting on the principle that you set a thief to catch a thief Morgan has been given the job of cleaning up piracy in the Caribbean.

Not surprisingly that news draws a mixed response from Morgan’s old buccaneering buddies. Some are willing to accept the royal pardon and the grants of land that Morgan has been given the authority to distribute whilst others refuse to give up their pirating ways.

Chief among those who reject Morgan’s offer is the rough, tough, ruthless and dissipated Captain Billy Leach (George Sanders). Those who accept Morgan’s offer are led by the dashing Jamie Waring (Tyrone Power). There’s a further complication however - Jamie has fallen in love with the beautiful Margaret Denby, daughter of the former governor. Margaret is engaged to Roger Ingram, an elegant foppish wastrel. Ingram sees Jamie as a dangerous romantic rival and he is determined to destroy the handsome reformed pirate But that’s not the end of Ingram’s perfidy - he is also selling information to Captain Billy Leach, assisting the pirate in preying on English shipping.

Jamie Waring is given the task of hunting down Billy Leach but it proves to be a tricky assignment. He finds himself outgunned by Leach’s squadron and Jamie has to pretend he has returned to his piratical ways while trying to find a way to turn the tables.

The mix of action, adventure, romance and humour is irresistible. The action sequences are impressive and it’s all filmed in glorious Technicolor and looks absolutely splendid.

As a swashbuckling hero Tyrone Power is very good although it has to be admitted he’s no Eroll Flynn. He does take his shirt off a lot though which presumably added quite a lot to his sex symbol image. Maureen O’Hara makes a feisty heroine. The strangest thing about this movie is George Sanders’ performance - instead of being the smooth aristocratic villain we expect he’s a scruffy red-bearded old sea dog. It’s bizarre casting but Sanders puts everything into it and he gets away with it.

It’s Laird Cregar though who steals the picture as Henry Morgan. He chews every piece of scenery he can get his hands on and he’s delightful. Anthony Quinn has a small role as Billy Leach’s chief lieutenant.

The Black Swan has everything you could possibly want in a pirate movie. Tremendous fun.

The Region 4 DVD from Bounty is totally lacking in extras but it’s a nice print.
Posted by dfordoom at 4:21 PM