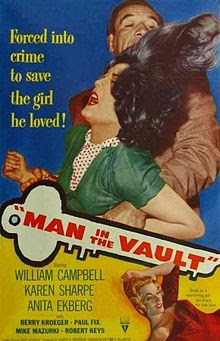 Man in the Vault is a competent 1956 B noir that provides decent entertainment without reaching any great heights.

Tommy Dancer (William Campbell) is a locksmith who is approached by small-time racketeer Willis Trent in a bowling alley. Trent needs a footlocker opened, a task for which he pays Tommy way too much money. That should have rung warning bells but it’s not until Trent explains that he actually has a much bigger job in mind that Tommy finally figures out he might be getting into something dangerous and illegal. By this time Tommy has fallen for glamorous rich girl Betty Turner (Karen Sharpe) he met at a party at Trent’s place and Tommy isn’t really thinking all that clearly.

He is smart enough to refuse Trent’s approach but it’s too late, Trent has him hooked and will use Betty to force Tommy to play ball.

Trent has a plan to rob big-league mobster Paul de Camp’s safety deposit box at a local bank. Trent used to be de Camp’s partner but while de Camp has moved up in the world Trent is still just a straightforward hoodlum. Trent’s plan is not a very good one, given that he’s the first person de Camp is going to suspect.

Tommy has always been basically an honest guy but meeting Betty has given him ideas. Her family is wealthy and her parents give her anything she wants. Tommy thinks that it’s not fair that he isn’t rich as well, so the lure of easy money starts to tempt him. In fact he starts to think that maybe it would be an even better idea to keep all of de Camp’s money himself instead of splitting with Trent. Tommy’s a nice boy but he’s not real bright.

And security at the bank is so lax that it really does seem like a no-risk plan. Except of course for the fact of having an angry mobster trying to kill you afterwards.

There are in fact a whole bunch of people involved in the pan to rob de Camp and they’re trying to double-cross each other. There’s shady lawyer Earl Faraday, who is also carrying a torch for Betty. There’s also de Camp’s glamorous girlfriend Flo (Anita Ekberg). It’s a pretty standard but serviceable crime movie plot with a touch of noir coming from the involvement of the well-meaning but weak-willed Tommy.

Technically the movie is at best competent. The chase scene in the bowling alley is reasonably well executed but don’t expect anything startling as far as visual style is concerned.

William Campbell is quite effective as Tommy Dancer, playing him as a bit of an innocent but with a bit of an edge as well that prevents the character from being too wet. Karen Sharpe is adequate as Betty, not quite a femme fatale and not quite a spoilt rich girl but a woman who certainly spells danger for Tommy.

Mike Mazurki, who played the heavy in countless crime and horror movies, is as entertaining as always as Trent’s chief henchman. Anita Ekberg is competent and certainly adds glamour.

Man in the Vault was produced by John Wayne’s production company, Batjac. While it’s one of the company’s lesser efforts it’s still worth a look.

The Region 4 DVD is barebones but it’s a decent widescreen print.
Posted by dfordoom at 3:49 PM